[http://www.nga.gov/content/ngaweb/research/casva/research-projects.html A Project of the National Gallery of Art, Center for Advanced Study in the Visual Arts ]
(Redirected from Chinese Taste)
Jump to:navigation, Quick search 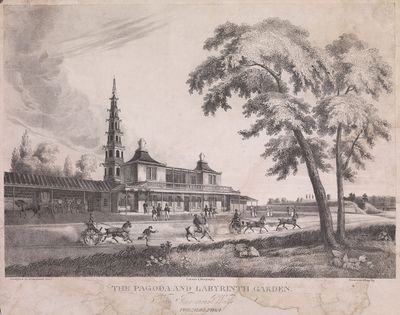 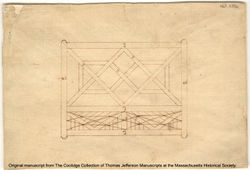 Lucrative commerce in the colonies helped to stimulate an interest in the Far East. As decorative objects, ceramics, and lacquered cabinets poured into the West in the 17th and 18th centuries, a taste for things Chinese grew. The increasing popularity of pattern books and design treatises during the same period helped spread Western ideas about China. Many of the Chinese-style details in American gardens derived from books such as William Halfpenny’s New Designs for Chinese Temples, triumphal arches, garden seats, palings, etc. (1750–52), Rural Architecture in the Chinese Taste (1755; written with his brother John), and Chinese and Gothic architecture properly ornamented (1752); William Chambers’s Designs of Chinese Buildings, Furniture, Dresses, Machines, and Utensils (1757) and A Dissertation on Oriental Gardening (1772); and Thomas Chippendale’s The Gentlemen and Cabinet-Maker’s Director. . . in the Gothic, Chinese and Modern Taste (1755). These were immensely popular in England and France and known in the colonies and early republic throughout the East Coast. Many drawings for designs in the Chinese manner can be traced to these publications. 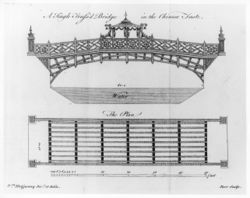 For example, Jefferson’s sketch for a “Chinese railing” [Fig. 2]—which was used extensively at Monticello and at the University of Virginia—is similar to plates in Halfpenny [Fig. 3] or Chippendale. Bridges, verandas, gates, garden furniture, and light frame summerhouses could easily be given a Chinese flair with criss-cross lattice work. Chambers’ Great Pagoda at Kew, reproduced in his widely known Plans, Elevations, Sections, and Perspective Views of the Gardens and Buildings at Kew in Surry (1763) [Fig. 4], served as the model for many pagodas such as the one by Haviland (see Fig. 1). 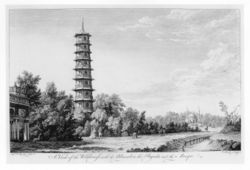 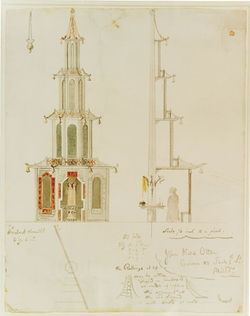 “[June] 12. Was politely received at dinner by Mr Barrell, & family, who shewed me his large & elegant arrangements for amusement, & philosophic experiments. . . His Garden is beyond any example I have seen. A young grove is growing in the back ground, in the middle of which is a pond, decorated with four ships at anchor, & a marble figure in the centre. The Chinese manner is mixed with the European in the Summer house which fronts the House, below the Flower Garden.”

“A few fabrics, rustic bridges, hermitages, a Temple, or a Chinese Kiosk or Pagoda, not expensive in their execution, would advantageously complete the embellishment of a country seat. . .
“Mr. [André] P[armentier]. by the advice of several of his friends, will furnish plans of landscape and picturesque gardens; he will communicate to gentlemen who wish to see him, a collection of his drawings of Cottages, Rustic Bridges, Dutch, Chinese, Turkish, French Pavilions, Temples, Hermitages, Rotundas, &c. For further particulars, inquiries personally, or by letter, addressed to him, post paid, will be attended to.” 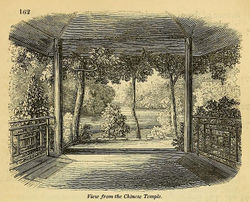 “86, The Chinese temple, on the highest part of the mount formed of the soil taken from the excavation now constituting the pond. The view from the interior of this temple is shown in. . . [Fig. 6]

“GARDENING. . .
“Figured parterres have got out of fashion, as a taste for open and extensive gardening has prevailed; but when the beds are not too fanciful, but regular in their shapes, and chiefly at right angles, after the Chinese manner, an assemblage of all sorts of flowers, in a fancy spot of about 60 feet square, is a delightful home scource [sic] of pleasure, worthy of pursuit. There should be neat edgings of box to these beds, or rather of neat inch-boards, painted lead colour, to keep up the mould.” 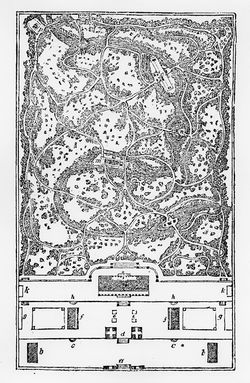 “478. A plan of a Chinese garden and dwelling. . . If this plan. . . is really correct, it seems to countenance the idea of the modern style being taken from that of the Chinese. . . [Fig. 7]
“6093. . . There are other characters of gardens, such as Chinese, which are not widely different from the modern. . .
“7161. . . Mason, the poet, invokes ‘simplicity,’ probably intending that this beauty should distinguish the English from the Chinese style: simplicity is also the ruling principle of Lord Kames.” 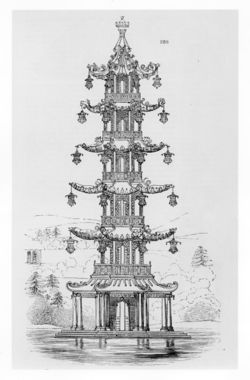 “The [octagon] pagoda. . . was intended to be eighty-eight feet high. It is placed on an island, in the centre of a small pond, and was to have been approached by a Chinese bridge richly ornamented. The diameter of the base of the pagoda is forty feet, and there were to have been six stories, the lower one of stone, and the others of cast iron. From the angles were to have been suspended forty highly enriched Chinese lamps, and these were to be lighted by a gasometer fixed in the lower story. Besides the lamps, there were to have been grotesque figures of monsters projecting over the angles of the canopies, which were to spout water from their eyes, nostrils, fins, tails, &c.; a column of water was also to have been projected perpendicularly from the terminating ornament on the summit of the structure, which, from the loftiness of the source of supply, would have risen to the height of seventy or eighty feet.” [Fig. 8]

“It is not a little remarkable that the Chinese taste in gardening, which was at first made known to the English public about this time, is by far the nearest previous approach to the modern style. Some critics, indeed, have asserted that the English are indebted to it for their ideas of the modern style. However this may be, and we confess it has very little weight with us, the harmonious system which the taste of the English has evolved in the modern style, is at the present day too far beyond the Chinese manner to admit of any comparison. The first is imbued with beauty of the most graceful and agreeable character, based upon nature, and refined by art; while the latter abounds in puerilities and whimsical conceits—rocky hills, five feet high—miniature bridges—dwarf oaks, a hundred years old and twenty inches in altitude— which, whatever may be our admiration for the curious ingenuity and skill tasked in their production, leave on our mind no very favorable impression of the taste which designed them. . .
“To these offices of pensive melancholy, it [the Weeping willow] appears to be dedicated in almost all countries. The Chinese and other Asiatic nations, and the Turks, as well as the enlightened Europeans, universally plant it in their cemeteries and last places of repose.”

Retrieved from "https://heald.nga.gov/mediawiki/index.php?title=Chinese_manner&oldid=39816"
Categories:
A Project of the Center for Advanced Study in the Visual Arts
National Gallery of Art, Washington