“The garden is not extensive, but it is disposed to the utmost advantage; the centre walk is terminated by a small green mount, close to which the Severn approaches; this elevation commands an extensive view of the bay, and the adjacent country. . . . there are but few mansions in the most rich and cultivated parts of England, which are adorned with such splendid and romantic scenery.”

“. . . many very magnificent monuments of the power and industry of the ancient inhabitants of these lands are visible. I observed a stupendous conical pyramid, or artificial mount of earth, vast tetragon terraces, and a large sunken area, of a cubical form, encompassed with banks of earth; and certain traces of a larger Indian town, the work of a powerful nation, whose period of grandeur perhaps long preceded the discovery of this continent. . . .
“old Indian settlements, now deserted and overgrown with forests. These are always on or near the banks of rivers, or great swamps, the artificial mounts and terraces elevating them above the surrounding groves.” 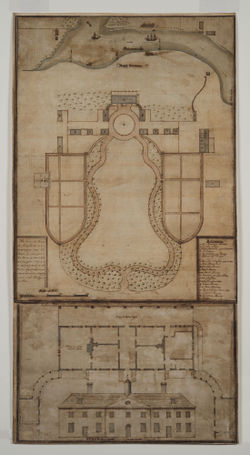 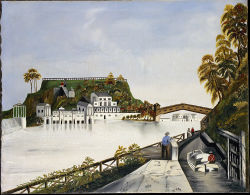 “For there may be therein [the garden] . . . a rocke or mount, with a fountaine in the midst thereof to convey water to every part of the Garden.”

“When the Situation of Gardens such, that the making of Slopes and Terraces are necessary, or cannot be avoided, they not only leave them naked of Shade as aforesaid, but break their Slopes into so many Angles, that their native Beauty is thereby destroy’d. Thus if by waste Earth a Mount be raised ten or twelve Feet high, you shall have its Slope, that should be entire from top to bottom, broken into three, if not four small trifling ones, and those mixt with Archs of Circles, &c. that still adds to their ill Effects: So that instead of having one grand Slope only with an easy Ascent, you have three or four small ones, that are poor and trifling.
“And the only reason why they are made in this Stair or Step-like manner, is first to shew their Dexterity of Hand, without considering the ill Effect; and lastly to imitate those grand Amphitheatrical Buildings, used by the Ancients, of which they had no more Judgement, than of the excellent Proportions of Architecture that was used therein, when those noble Structures were first erected.
“General DIRECTIONS, &c. . . .
“XII. That Earths cast out of Foundations, &c. be carried to such Places for raising of Mounts, from which, fine Views may be seen.
“XIII. That the Slopes of Mounts, &c. be laid with a moderate Reclination, and planted with all Sorts of Ever-Greens in a promiscuous Manner, so as to grow all in a Thicket; which has a prodigious fine Effect.
“In this very Manner are planted two beautiful Mounts in the Gardens of the Honourable Sir Fisher Tench at Low-Layton in Essex.
“XIV. That the Walks leading up the Slope of a Mount, have their Breadth contracted at the Top, full one half Part; and if that contracted Part be enclosed on the Sides with a Hedge whose Leaves are of a light Green, ’twill seemingly add a great Addition to the Length of the Walk, when view’d from the other End. . . .
“XXI. Such Walks as must terminate within the Garden, are best finish’d with Mounts.”

“In other parts are sometimes discovered eminences, or rising grounds, as a high terrace, mount, steep declivity, or other eminence, ornamented with curious trees and shrubs, with walks leading under the shade of trees, by easy ascents to the summit, where is presented to the view, an extensive prospect of the adjacent fields, buildings, hamlets, and country around, and likewise affording a fresh and cooling air in summer. . . .
“Fountains and statues, are generally introduced in the middle of spacious opens; statues are also placed at the terminations of particular walks, sometimes in woods, thickets, and recesses, upon mounts, terraces, and other stations, according to what they are intended to represent.”

“MOUNT, n. [Fr. mont; Sax. munt; It. Port. Sp. monte; Arm. menez, mene; W. munt, a mount, mountain or mound, a heap; L. mons, literally a heap or an elevation. Ir. moin or muine; Basque, mendia. . . .]
“1. A mass of earth, or earth and rock, rising considerably above the common surface of the surrounding land. Mount is used for an eminence or elevation of earth, indefinite in highth [sic] or size, and may be a hillock, hill or mountain. We apply it to Mount Blanc, in Switzerland, to Mount Tom and Mount Holyoke, in Massachusetts, and it is applied in Scripture to the small hillocks on which sacrifice was offered, as well as to Mount Sinai. Jacob offered sacrifice on the mount or heap of stones raised for a witness between him and Laban. Gen. xxxi.
“2. A mound; a bulwark for offense or defense.”

Categories:
This page was last edited on April 1, 2021, at 16:21.
Content is available under Creative Commons Attribution-NonCommercial-ShareAlike unless otherwise noted.
Terms of Use
Privacy Policy
A Project of the Center for Advanced Study in the Visual Arts
National Gallery of Art, Washington