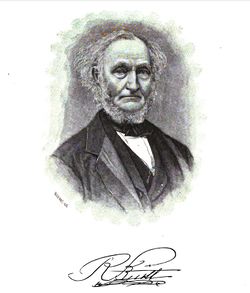 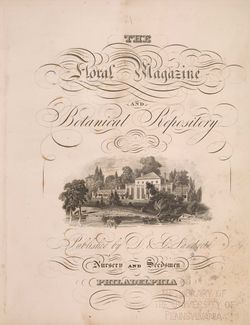 The partnership of Hibbert & Buist was successful but not long-lived; Thomas Hibbert died on May 11, 1833, just a year after the National Gazette’s report.[8] Hibbert’s widow determined to carry on her husband’s business while Buist struck out on his own, using part of the Hibbert & Buist stock to open his own independent nursery on 12th Street [Fig. 3] and a seed warehouse on Chestnut Street.[9] “R. Buist’s Exotic Nursery” featured a greenhouse 150 feet in length, 18 feet wide, and 15 feet high, that was divided into five compartments to accommodate the different plants he stocked. The front compartment was referred to as the “New-Holland House” and featured various plants from Australia, including species of Banksia—which Buist likely learned to cultivate while working with McNab, who specialized in the plant[10]—and was followed by the hothouse, which featured the canary bird flower (Tropaeolum peregrinum), petunias, ficuses, and other rare plants. Toward the rear Buist created compartments dedicated to specific types of flower, including the Geranium House, the Camellia House, and the Rose House.[11] 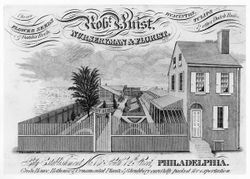 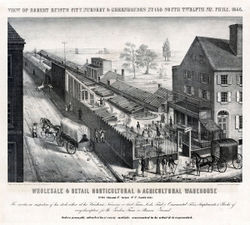 Buist’s nursery and seed warehouse were enormously successful during the 1830s and 1840s, allowing him to expand his business. By 1837 he had built a separate camellia house and small stove at South 12th Street [Fig. 4], and by 1849 he had established a nursery for fruit and ornamental trees southwest of Philadelphia, called Rosedale, where he eventually consolidated all but his seed business in 1850.[12] During these decades Buist remained an active member of the Pennsylvania Horticultural Society, gaining recognition for helping found the American Pomological Society, as well as for his introduction of verbenas and various types of roses to North America, and for the introduction of the poinsettia to Europe. He is often—if mistakenly—given credit for introducing the poinsettia to the United States as well; however, as Joel T. Fry has observed, it was first cultivated at the Bartram Botanic Garden and Nursery in 1828.[13] Buist also authored three frequently reprinted gardening manuals—the American Flower Garden Directory (1832), the Rose Manual (1844), and the Family Kitchen Gardener (1847)—which helped make him one of the most recognizable figures in American horticulture.[14]

Category:
This page was last edited on September 8, 2021, at 20:01.
Content is available under Creative Commons Attribution-NonCommercial-ShareAlike unless otherwise noted.
Terms of Use
Privacy Policy
A Project of the Center for Advanced Study in the Visual Arts
National Gallery of Art, Washington