HEALD will be upgrading in spring 2021. New features and content will be available this summer. Thank you for your patience!
Last modified on 13 February 2017, at 17:58 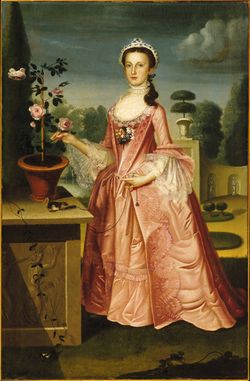 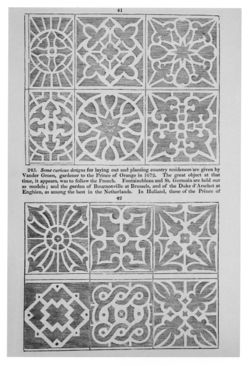 The term Dutch style was used in early America to deﬁne an ancient or geometric style of garden design that predated the modern or natural style of design. It referred, for the most part, to the late seventeenth- and early eighteenth-century classical canal garden, which became popular in England under the reign of William and Mary and in America in the early colonial period in both Dutch and English settlements. These gardens were laid out with parallel axes, complex parterres, Italo-French fountains and sculpture, and geometrical topiary [Fig. 1]. [1] In An Encyclopaedia of Gardening (1826), J. C. Loudon provided a dozen plans for parterres in the Dutch style that exempliﬁed its compartmentalized character [Fig. 2]. The Castello plan of New Amsterdam (1660) depicts, in a highly stylized manner, the type of garden called the Dutch style [Fig. 3]. 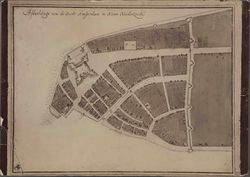 Although the Dutch garden type prevailed in America in such colonies as New Netherlands and also in the British colonies, evidence of the term’s use occurs only in the early nineteenth century. [2] In garden literature of the period, discussion of this style was concerned with its contrast to the modern, naturalistic styles of landscape gardening that employed irregular, asymmetrical compositions and insisted on a subtler display of the hand of the artist/gardener. American writers such as Robert Buist, George Watterston, and A. J. Downing seem to have depended upon Horace Walpole and J. C. Loudon for their descriptions of the Dutch style. [3] The illustration in Downing’s A Treatise on the Theory and Practice of Landscape Gardening (1849) exempliﬁes the typical Dutch style of garden that he also called the geometric. This image, however, placed in the chapter about the history of gardens, was not promoted by Downing as a new option in design. 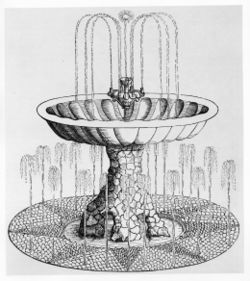 During the early nineteenth century, however, with the interest in the revival of eclectic historical styles, the Dutch style for some became one of the many selections that one might make from a number of possibilities, particularly in the design of garden embellishments. According to an 1826 advertisement offered by André Parmentier’s horticultural and botanical garden in Brooklyn, a Dutch pavilion (along with Chinese, Turkish, French or rustic pavilions) was included in the list of “inexpensive fabrics.” Loudon (1834) published a view of a “rustic Dutch fountain,” which, he added, may be “erected at very little expense” [Fig. 5]. It remained in the realm of the exotic and the fantastic, or as Downing disparagingly quipped, “a distortion of nature.”

“Mr. [Andrew] P[armentier]. by the advice of several of his friends, will furnish plans of landscape and picturesque gardens; he will communicate to gentlemen who wish to see him, a collection of his drawings of Cottages, Rustic Bridges, Dutch, Chinese, Turkish, French Pavilions, Temples, Hermitages, Rotundas, &c. For further particulars, inquiries personally, or by letter, addressed to him, post paid, will be attended to.”

“All the ingredients of Pliny’s corresponded exactly with those laid out by London and Wise on Dutch principles. He talks of slopes, terraces, a wilderness, shrubs methodically trimmed, a marble bason, pipes spouting water, a cascade falling into the bason, bay-trees, alternately planted with planes, and a straight walk, from whence issued others parted off by hedges of box, and apple-trees, with obelisks places between every two. There wants nothing but the embroidery of a parterre, to make a garden in the reign of Trajan serve for a description of one in that of King William.”

“115. The Dutch are generally considered as having a particular taste in gardening, yet their gardens, Hirschfeld observes, appear to differ little in design from those of the French. The characteristics of both are symmetry and abundance of ornaments. The only difference to be remarked is, that the gardens of Holland are more conﬁned, more covered with frivolous ornaments, and intersected with still, and often muddy pieces of water. . . .
“116. Grassy slopes and green terraces and walks are more common in Holland than in any other country of the continent, because the climate and soil are favourable for turf; and these verdant slopes and mounds may be said to form, with their oblong canals, the characteristics of the Dutch style of laying out grounds.” 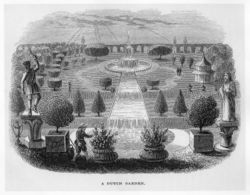 “THE DUTCH STYLE
“The leading character of the Dutch style is rectangular formality, and what may sometimes be termed clumsy artiﬁce, such as yew trees cut out in the intended form of statues, though they require a label to inform the observer what they mean to represent. The box, hollies, and other trees, which we occasionally see trimmed in the form of cheeses, either single or piled one above another with diminishing diameters, are in this style. The taste for these fancies still lingers among suburban amateur gardeners, notwithstanding the ridicule with which it has been so unsparingly treated by the press. We have only to say, that we have no wish to oppose the Dutch style, should any of our readers choose to adopt it; but it will be indispensable, if evergreens are to be trimmed into the forms of mops and cheeses, that the compartments correspond in formality of aspect, nothing being more offensive to the eye than incongruous mixture of styles.” [Fig. 6]

“A late writer says of Dutch gardening, that it ‘is rectangular formality’: they take great pride in trimming their trees of yew, holly, and other evergreens, into every variety of form, such as mops, moons, halberds, chairs, &c. In such a system it is indispensable to order that the compartments correspond in formality, nothing being more offensive to the eye than incongruous mixtures of character.”

“The Dutch style, introduced by William III, and which prevailed in England for about ﬁfty years was not much better, and was distinguished for sloped terraces formed of grass, land and water made into regular shapes by art, and adorned with trees in pots, or ‘planted alternately and clipped to preserve the most perfect regularity of shape’— and leisure, ‘in trim gardens, took his pleasure.’ ‘The compass and the square,’ says Walpole, ‘were of more use than the nurseryman. The measured walk, the quincunx and the étoile imposed their unsatisfying sameness on every royal and noble garden. Trees were headed and their sides pared away; many French groves seem green chests set upon poles. Seats of marble, arbors and summer houses terminated every vista, and symmetry, even when the space was too large to permit its being remarked at one view, was so essential, that, as Pope observed,

‘Grove nods to grove, each alley has a brother
And half the platform just reﬂects the other.’

This formal, or geometric style was all the rage at the commencement of the 17th century in those parts of Europe where ornamental gardening prevailed, and the most distinguished artist of that age, if artist he could be called, was Le Notre.”

“But, in copying [French seventeenth-century gardens such as Versailles], every nation seems to have mingled with the ‘grand style’ some elementary notions of its own, expressive of national character or locality. The most marked of these imitators were the Dutch, whose style of ornamental gardening seems sufﬁciently unique to be worthy of being considered a separate school.
“And how shall we characterize the Dutch school, which even to this day, in the Low Countries, has scarcely given way to the continental admiration for the ‘jardin Anglais;’ this double distilled compound of labored symmetry, regularity, and stiffness, which seems to convey to the quiet owners so much pleasure, and to the tasteful traveller and critic so much despair! A stagnant and muddy canal, with a bridge thrown over it, and often connected with a circular ﬁsh-pond; a grass slope and a mound of green turf, on which is a pleasure or banqueting house with gilt ornaments; numberless clipped trees, and every variety of trellis-work lively with green paint; in the foreground beds of gay bulbs and ﬂorists’ ﬂowers, interspersed with huge orange trees in tubs, and in the distance smooth green meadows—such are the unvarying features of the Hollander’s garden or grounds. The true Dutchman looks upon his garden as a quiet place to smoke and be ‘content’ in; if he lazily saunters through, it is rather to enjoy the gay pencillings of some new bed of tulips than to enjoy the elegance and harmony of its design, the variety of scenery, or the freshness and beauty of the foliage. At the same time, he is neither exclusive nor secret with the stores of enjoyment which he has within its bounds; and very many of the private villas near Rotterdam, and in other parts of Holland, have mottoes like those inscribed over the gateways—‘Tranquil and Content,’ ‘My desire is satisﬁed’—(genegentheiel is volden)—‘Friendship and sociability,’ and numerous others of a similar import. . . .
“Whatever may have been the absurdities of the ancient style, it is not to be denied that in connexion with highly decorated architecture, its effect, when in the best taste—as the Italian—is not only splendid and striking, but highly suitable and appropriate. Sir Walter Scott, in an essay on landscape embellishment, says, ‘if we approve of Palladian architecture, the vases and balustrades of Vitruvius, the enriched entablatures and superb stairs of the Italian school of gardening, we must not, on this account, be construed as vindicating the paltry imitations of the Dutch, who clipped yews into monsters of every species, and relieved them with painted wooden ﬁgures. The distinction between the Italian and Dutch is obvious. A stone hewn into a gracefully ornamented vase or urn, has a value which it did not before possess: a yew hedge clipped into a fortiﬁcation, is only defaced. The one is a production of art, the other a distortion of nature. . . . 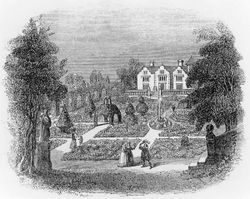 “The beauties elicited by the ancient style of gardening were those of regularity, symmetry, and the display of labored art. These were attained in a merely mechanical manner, and usually involved little or no theory. The geometrical form and lines of the buildings were only extended and carried out in the garden. In the best classical models, the art of the sculptor conferred dignity and elegance on the garden, by the ﬁne forms of marble vases and statues; in the more intricate and labored specimens of the Dutch school prevalent in England in the time of William IV. . . . the results evince a fertility of odd conceits, rather than the exercise of taste or imagination. Indeed, as, to level ground naturally uneven, or to make an avenue, by planting rows of trees on each side of a broad walk, requires only the simplest perception of the beauty of mathematical forms, so, to lay out a garden in the geometric style, became little more than a formal routine, and it was only after the superior interest of a more natural manner was enforced by men of genius, that natural beauty of expression was recognised, and Landscape Gardening was raised to the rank of a ﬁne art. . . . [Fig. 7]
“PLANTATIONS IN THE ANCIENT STYLE. In the arrangement and culture of trees and plants in the ancient style of Landscape Gardening, we discover the evidences of the formal taste,— abounding with every possible variety of quaint conceits, and rife with whimsical expedients, so much in fashion during the days of Henry and Elizabeth, and until the eighteenth century in England, and which is still the reigning mode in Holland, and parts of France. In these gardens, nature was tamed and subdued, or as some critics will have it, tortured into every shaped which the ingenuity of the gardener could suggest; and such kinds of vegetation as bore the shears most patiently, and when carefully trimmed, assumed gradually the appearance of verdant statues, pyramids, crowing cocks, and rampant lions, were the especial favorites of the gardeners of the old school.”