Paul Revere (December 21, 1734–May 10, 1818) was a prominent Boston silversmith, engraver, proto-industrialist, and patriot who played a key role in mobilizing the colonial activism that led to the American Revolution. He designed an obelisk that appeared briefly on Boston Common to celebrate the repeal of the Stamp Act, and is remembered for the “midnight ride” during which he alerted the colonial militia to the approach of British forces on the eve of the battle of Lexington. 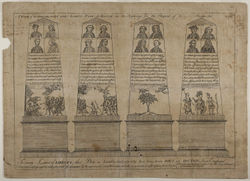