“I am obliged to thee for thy kindness to my son |William. He longs to be with thee; but it is more for the sake of Botany, than Physic or Surgery, neither of which he seems to have any delight in. I have several books of both but can’t persuade him to read a page in either. Botany and drawing are his delight.” 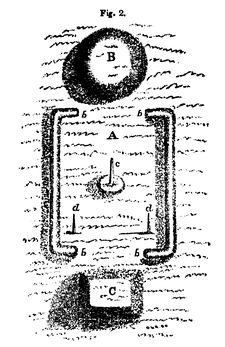 “Fig. 6 is a perspective plan of this great mound and its avenues, the latter leading off to an expansive savanna or natural meadow. A, the mound, about forty feet in perpendicular height; B, the highway leading from the mound in a straight line to the pond C, about a half a mile distant. . . . The sketch of the mound also illustrates the character of the mounds in the Cherokee country; but the last have not the highway or avenue, and are always accompanied by vast square terraces, placed upon one side or the other. On the other hand, we never see the square [[terrace/slope|terraces] accompanying the high mounds of East Florida.” [Fig. 2]

"Near Philadelphia I found the botanic garden of Messrs. John and William Bartram. This is likewise an old establishment, founded under the patronage of the late Dr. Fothergill, by the father of the now living Bartrams. This place, delightfully situated on the banks of the Delaware, is kept up by the present proprietors, and probably will increase under the care of the son of John Bartram, a young gentleman of classical education, and highly attached to the study of botany. Mr. William Bartram, the well known author of “Travels through North and South Carolina,” I found a very intelligent, agreeable, and communicative gentleman; and from him I received considerable information about the plants of that country, particularly respecting the habitats of a number of rare and interesting trees. It is with the liveliest emotions of pleasure I call to mind the happy hours I spent in this worthy man’s company, during the period I lived in his neighbourhood.