Beyond his political service as a lauded international diplomat and two-term president, Thomas Jefferson (April 13, 1743–July 4, 1826)[1] was a gentleman farmer and planter, horticulturist, landscape designer, and planner. He valued experimentation and documentation, evident in his Garden Book, a horticultural diary from 1766 to 1824. He shared his knowledge of landscape design and gardening, as well as the material goods of plants and seeds, with an international community over the course of sixty years, from the end of the colonial period to that of the early Republic. Jefferson designed a range of landscape and gardens types including his plantations, the new capital at Washington DC, and the University of Virginia. 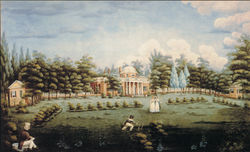 Born at Shadwell, his family’s Piedmont plantation in colonial Virginia [Fig. 1], Thomas Jefferson spent his early childhood at William Randolph’s Tuckahoe Plantation before returning to the family home. He received a classical education and also learned from his encounters with Native American traders.[2]

“choose out for a Burying place some unfrequented vale in the park, where is, ‘no sound to break the stillness but a brook, that bubbling winds among the weeds; no mark of any human shape that had been there, unless the skeleton of some poor wretch, Who sought that place out to despair and die in.’ let it be among antient [sic] and venerable oaks; intersperse some gloomy evergreens. the area circular, abt. 60 f. diameter, encircled with an untrimmed hedge of cedar, or of stone wall with a holly hedge on it in the form below in the center of it erect a small Gothic temple of antique appearance. appropriate one half to the use of my own family, the other of strangers, servants, etc. erect pedestals with urns, etc., and proper inscriptions. the passage between the walls, 4 f. wide. on the grave of a favorite and faithful servant might be a pyramid erected of the rough rock-stone; the pedestal made plain to receive an inscription. let the exit of the spiral at (a) look on a small and distant part of the blue mountains. in the middle of the temple an altar, the sides of turf, the top of plain stone. very little light, perhaps none at all, save only the feeble ray of an half extinguished lamp. . . .

“a few feet below the spring level the ground 40 or 50 f. sq. let the water fall from the spring in the upper level over a terrace in the form of a cascade. then conduct it along the foot of the terrace to the Western side of the level, where it may fall into a cistern under a temple, from which it may go off by the western border till it falls over another terrace at the Northern or lower side. let the temple be raised 2. f. for the first floor of stone. under this is the cistern, which may be a bath or anything else. the 1st story arches on three sides; the back or western side being close because the hill there comes down, and also to carry up stairs on the outside. the 2d story to have a door on one side, a spacious window in each of the other sides, the rooms each 8. f. cube; with a small table and a couple of chairs. the roof may be Chinese, Grecian, or in the taste of the Lantern of Demosthenes at Athens. . . . [Fig. 5 and 6]

Retrieved from "https://heald.nga.gov/mediawiki/index.php?title=Thomas_Jefferson&oldid=34340"
Category:
A Project of the Center for Advanced Study in the Visual Arts
National Gallery of Art, Washington