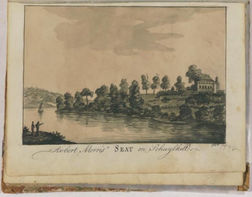 Through a series of purchases begun in 1770, Robert Morris accumulated 300 acres of land on the northern border of Philadelphia, roughly corresponding with the portion of William Penn’s Springettsbury estate known as Vineyard Hill. Morris renamed the property The Hills and erected a “very beautiful house, built in the Italianate style” on a knoll overlooking the Schuylkill River.[2] While maintaining his primary residence in town, Morris frequently walked out to this rural retreat to dine or take tea, often in the company of friends and politically prominent guests.[3] During the Revolutionary War, British troops advancing on Philadelphia established a picket directly behind Morris’s house, which they tore down on November 28, 1777. They also demolished as many as twenty farm buildings and chopped down Morris’s “splendid fruit trees.”[4] On November 29 George Washington’s aide-de-camp, Tench Tilghman (1744–1786), informed Morris that the only thing left of his country estate was the ground itself, “in every other respect it is in a state of Nature.”[5] Philadelphia physician Josiah Bartlett (1729–1795) later described the entire area north of the city as “one common waste. . . . Mr. Dickinson and Morris’s fine seats all demolished.”[6]

On his return to The Hills, Morris apparently decided not to replace his ruined house with a new residence, but rather to create a spectacular greenhouse. In 1780 he had converted the greenhouse at nearby Springettsbury into a dining room while he and his family were leasing the property as a summer retreat. He was so delighted by the "beauty and convenience" of the repurposed building, that after a fire broke out at Springettsbury in March 1784, Morris began developing a greenhouse suitable for entertaining at The Hills.[7] One of his few business records from this period notes payments made at The Hills to the stone cutter William Stiles for “sundry work done by him at the Hot and Green Houses from October 1784 to December 1785.”[8] Construction was still underway in July 1787 when Manasseh Cutler paid a brief visit to Morris’s property and reported: “His country seat is not yet completed but it will be superb. It is planned on a large scale, the gardens and walks are extensive and the villa situated on an eminence has a commanding prospect down the Schuylkill to the Delaware.”[9]

The “villa” glimpsed by Cutler was actually The Hills’ increasingly elaborate greenhouse. Morris’s ledger books document substantial payments to stone masons, brick layers, carpenters, glaziers, ironmongers, and painters working on the greenhouse and hothouses.[10] By 1797 two 50-foot-wide hothouse wings flanked the two-story greenhouse. “Two large rooms” stood at the back of the hothouses and “a House for a gardener, with one large and five small rooms,” connected to the greenhouse. Among its furnishings, the house contained four dining tables with chairs and place settings for eighteen guests.[11] There was also “an excellent vault under the greenhouse, and a covered room for preserving roots &c. in winter.”[12] The many visitors Morris hosted at The Hills ran the gamut from George Washington (a frequent dinner guest during the Continental Convention in 1787) to a delegation of Seneca Indians, who “dined with Morris at the Greenhouse out of town” in April 1792.[13] The Philadelphia miniature painter Jeremiah Paul Jr. (1761–1820) depicted the famous site in “Robert Morris’ Seat on Schuylkill,” a watercolor sketch dated July 20, 1794 [Fig. 1], which probably relates to “a Landscape of The Hills Green House &c,” for which Morris paid $15 on November 24, 1794.[14]

While building the greenhouse and hothouses, Morris also assembled an array of exotic plants and created a lush garden. Later accounts of this section of the property (when under the ownership of Henry Pratt) suggest that it had a geometric design and that the plants were “interspersed with statues and busts,” as at neighboring Bush Hill.[15] Charles Willson Peale possibly provided a glimpse of the garden in the background of his portrait of c. 1782 of Robert Morris’s wife, Mary White Morris (1749–1827). The orange branch held by Mary Morris in Peale’s portrait alludes to the valuable collection of citrus trees and other exotic plants for which The Hills became well known. Visiting the estate on June 1, 1797, the German expatriate farmer Jacob Hiltzheimer (1729–1798) reported, “Robert Morris’s gardener . . . made us some very good lemon punch, the fruit grown in the garden, and showed us a number of pineapples growing and likewise two coffee trees in bloom.”[16]

Morris’s ledgers record numerous payments for flower pots, as well as cedar tubs for the greenhouse and coal for the hothouse.[17] The ledgers unfortunately identify few specific plants, other than “a box with a Tree from Charlston [sic], “4 large Elm Trees,” and “fruit trees &c.”[18] Morris evidently cultivated grapes, and became a subscriber of the Society for Promoting the Cultivation of Vines in February 1794. A succession of gardeners tended the garden and greenhouse at The Hills and managed plant sales. David Landreth served as head gardener from 1791 to 1796 at an annual salary of £70.[19] F. Gottreau succeeded him for a short time in 1797, followed by James Donnely from 1797 to 1799. Other gardeners who worked at The Hills included David Landreth’s brother, Cuthbert (1793 to 1799), and William Read (1797).[20] A few tenants over the years helped tend Morris’s extensive property. On July 18, 1797, Jacob Hiltzheimer was astonished by the great quantity of “grape vines loaded down with grapes” that Peter Kuhn had cultivated on a lot that was “lately part of Robert Morris’s garden.”[21] Plants from The Hills continued to circulate in Philadelphia and other parts of the country for years after Morris’s death. For example, in 1807 Thomas Jefferson received cuttings from red and white freestone peaches that originated with specimens Morris had imported from Italy. In 1876 the Cincinnati gardener Jacob Hoffner (1799–1894) donated to Horticulture Hall in Philadelphia a Sago palm that had grown for many years at The Hills.[22]

From 1793 to 1795, while serving as president of the Schuylkill and Susquehanna Navigation Company, Morris arranged for a navigable canal to be dug from Bush Hill to the northwest boundary of The Hills.[23] Failed land speculations and other financial embarrassments (including a ruinously expensive townhouse designed by Pierre-Charles L’Enfant) placed Morris deeply in debt. The Hills was subdivided into lots and disbursed at a sheriff’s sale held on March 15, 1799. Henry Pratt, one of Morris’s creditors, purchased the two lots that contained the greenhouse and farm buildings, totaling a little over 42 acres. Several months later, Pratt paid Morris $750 for the greenhouse plants.[24] Almost immediately, Pratt began erecting a manor house and redeveloping the landscape and greenhouse collections on his property, which he named Lemon Hill. The merchant William Crammond purchased another section of The Hills where he built Sedgeley, a Gothic Revival house designed by the architect Benjamin Henry Latrobe.

Category:
This page was last edited on August 17, 2021, at 18:21.
Content is available under Creative Commons Attribution-NonCommercial-ShareAlike unless otherwise noted.
Terms of Use
Privacy Policy
A Project of the Center for Advanced Study in the Visual Arts
National Gallery of Art, Washington