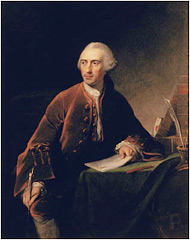 During the 1740s Vaughan established extensive commercial enterprises in London, the West Indies, and the American colonies. He strengthened his ties to America through marriage in 1747 to Sarah Hallowell (1727-1809), daughter of the wealthy Boston merchant, shipbuilder, and landowner Benjamin Hallowell. [1] Unlike his loyalist father-in-law, Vaughan was a passionate advocate of American liberty and a great admirer of George Washington. In London he was a member of the “Club of Honest Whigs”--a liberal coterie of intellectuals and religious dissenters (several of them, like Vaughan, Unitarians) who met to discuss science, philosophy, and social and political reform. [2] At his home in the English village of Wanstead, Vaughan hosted visiting American patriots such as Benjamin Franklin, who became an intimate family friend, and Josiah Quincy, Jr., to whom Franklin introduced Vaughan in 1774.[3] It was possibly at Wanstead that Vaughan developed the knowledge of landscape gardening that he later brought to America. At nearby Wanstead House, a magnificent Palladian residence designed by Colen Campbell, the existing formal gardens were among the first in England to be renovated (c. 1725-1771) in the Romantic, naturalistic mode that became known as the English Style. Thousands of shrubs and trees were added to the park, and architectural accents (such as a boathouse-grotto on the manmade lake and an ornamental temple that also functioned as a poultry house and keeper’s lodge) were erected on the grounds. [4] Analogous features were included in landscape projects Vaughan later oversaw in Philadelphia.

Within months of the conclusion of the American revolutionary war, Vaughan re-located his family to Philadelphia where, in December 1783, he met and initiated an enduring friendship with his hero, George Washington, to whom he was introduced by Benjamin Rush. [5] Vaughan took particular interest in the architecture, grounds, and interior decoration of Mount Vernon, advising Washington on fashionable English trends, offering to supply skilled workmen, and sending gifts such as an English fireplace mantel carved with rustic subjects. [6] Vaughan also became a driving force within Philadelphia’s intellectual, civic, and scientific communities. By January 1784 he had engaged a workman to implement his ambitious plan to landscape the State House Yard (an open green at the center of State House Square) as a public garden. [7] He joined the American Philosophical Society in the same month, and was soon developing complementary plans for Philosophical Hall, the Society’s new building on State House Square. In a letter of March 8, 1784 Vaughan assured the Society’s founder, Benjamin Franklin, that the building would “be sufficiently ornamental not to interfere materially with the views of making a publick walk.”[8] Vaughan initially envisioned the State House Yard as a national arboretum, with “a specimen of every sort of [tree and shrub] in America that will grow in this state.” [9] Vaughan purchased many of trees and shrubs from John and William Bartram, and also consulted the Bartrams’ cousin Humphry Marshall. Convinced of the public utility of Marshall’s “original botanical information of the New World” and having failed in May 1785 to gain the financial support of the American Philosophical Society (of which he was now a vice president) and the Philadelphia Society for the Promotion of Agriculture (which he had co-founded a few months earlier), Vaughan personally supervised and financed publication of Marshall’s manuscript, Arbustrum [sic] Americanum (1785), and even translated Latin terms for the English language index. [10]

Although Vaughan ultimately scaled back his encyclopedic plan for landscaping the State House Yard, he nevertheless assembled a great number and variety of specimens, which he laid out in accordance with the naturalistic landscape conventions he had absorbed in England. Contemporary accounts attest to Vaughan’s personal supervision of the work, and it was widely known that he was chiefly responsible for overseeing the project and financing the majority of the materials and labor. [11] Even travelers merely passing through Philadelphia were aware of his agency, peppering their descriptions of the State House Yard with praise for his good taste and generosity. Vaughan also received accolades for his signal contributions to the American Philosophical Society. In a letter of August 2, 1786 Benjamin Rush observed, "He [Vaughan] has been the principal cause of the resurrection of our Philosophical Society. He has even done more, he has laid the foundation of a philosophical hall which will preserve his name and the name of his family among us for many, many years to come." [12] Less well known was Vaughan’s responsibility for the fashionable pleasure garden recently opened at Gray’s Tavern on the Schuylkill River. With the aid of an English gardener and a team of laborers, Vaughan had transformed the steep, wooded grounds into a romantic park known as Gray's Garden. A maze of paths meandered through informal plantings of flowers and shrubs, and featured such picturesque elements as grottoes, Chinese bridges, and a rustic hermitage that functioned as a bathhouse. [13]

Despite his many occupations in Philadelphia, Vaughan traveled frequently to Boston and visited other regions of the United States. In July 1786 he and Manasseh Cutler began preparations for a trip to the White Mountains, where they intended to study native flora, fauna, and minerals (Vaughan’s pet subject), aided by scientific instruments Vaughan had imported from Europe. [14] In 1787 Vaughan hosted two dinners for George Washington while the president was in Philadelphia for the Federal Convention, and then set off on a 1400-mile journey toMount Vernon. During his trip, Vaughan kept a journal in which he detailed the sites and natural phenomena he encountered while traveling through Pittsburgh (celebrating the 4th of July at Fort Pitt), Berkeley Springs, Williamsburg, and other towns. [15] During the week he spent at Mount Vernon, Vaughan made notes on the mansion and grounds and completed a sketch, from which he later produced two more detailed versions, one of which he sent as a gift to Washington. [16]

Anon., “Account of the State-House of Pennsylvania,” The Columbian Magazine, 1, no. 11 (July 1787), 51; https://archive.org/details/columbianmagazin17861787phil The state-house yard has been highly improved by the exertions of Mr. Samuel Vaughan, and affords two gravel walks, shaded with trees, a pleasant lawn, and several beds of shrubs and flowers.

Anon [“B.”], Explanation of the Plate, exhibiting a View of several Public Buildings in the City of Philadelphia, Columbia Magazine 4, no. 1 (January 1790), 25-26; https://archive.org/details/columbianmagazin41790phil 25) The State-house square, already mentioned, is bounded on the north by Chesnut-street, on the south by Walnut-street, on the east by Fifth-street, and on the west by Sixth-street. It is inclosed [sic], on three sides, by a brick wall…. This area has, of late, been judiciously improved, under the direction of late, been judiciously been improved, under the direction of Samuel Vaughan, Esq. It consists of a beautiful lawn, interspersed with little knobs or tufts of flowering shrubs, and clumps of trees, well disposed. Through the middle of the gardens, runs a spacious gravel-walk lined with double rows of thriving elms, and communicating with serpentine walks which encompass the whole area the whole area. These surrounding walks are not uniformly on a level with the lawn; the margin of which, being in some parts a little higher, forms a bank, which, in fine weather, affords pleasant seats. When the trees attain to a larger size, it will be proper to place a few benches under them, in different situations, for the accommodation of persons frequenting the walks. These gardens will soon, if properly attended to, be in a condition to admit of our citizens indulging themselves, agreeably, in the salutary exercise of walking. [26] The grounds, though not so extensive as might be wished, are sufficiently large to accommodate very considerable numbers: the objects within view are pleasing; and the situation is open and healthy. If the ladies, in particular, would occasionally recreate themselves with a few turns in these walks, they would find the practice attended with

Samuel Vaughan to Humphry Marhsall As it is my wish to plant in the State house square specimens of every tree & shrub that grow in the several states on this Continent that will thrive here, I have enclosed a sketch of such others as I have been able to procure since the 7th of last month, with a list of such others have occurred to me hitherto, but as I am unacquainted with the vast variety remaining & that you have turned your thoughts in that line, I have to request, & shall be much obliged to you for a list of such as occur to you, with directions in what state or place they are to be had; that I may lay out to procure them to plant in the fall.

Categories:
This page was last edited on October 5, 2021, at 21:31.
Content is available under Creative Commons Attribution-NonCommercial-ShareAlike unless otherwise noted.
Terms of Use
Privacy Policy
A Project of the Center for Advanced Study in the Visual Arts
National Gallery of Art, Washington