Mount Vernon, located in Fairfax County, Virginia near Alexandria, was the plantation home of the first President of the United States, George Washington.

"I wish that the afore-mentioned shrubs and ornamental and curious trees may be planted at both ends that I may determine hereafter from circumstances and appearances which shall be the grove and which the wilderness. It is easy to extirpate Trees from any spot but time only can bring them to maturity."

"[8 February] Finding that I should be very late in preparing my Walks & Shrubberies if I waited till the ground should be uncovered by the dissolution of the Snow—I had it removed Where necessary & began to Wheel dirt into the Ha! Haws &ca.—tho' it was it exceeding miry & bad working. . . .

"3 Brown Beuries in the west square in the Second flat—viz. 1 on the border (middle thereof) next the Fall or slope—the other two on the border above the walk next the old Stone Wall....

"[22 February] I also removed from the Woods and old fields, several young Trees of Sassafras, Dogwood, & red bud, to the Shrubbery on the No. Side the grass plat. . . .

"[28 February] Planted all the Mulberry trees, Maple trees, & Black gums in my Serpentine walks and the Poplars on the right walk—the Sap of which and the Mulberry appeared to be moving. Also planted 4 trees from H. Hole the name unknown but of a brittle wood which has the smell of Mulberry. . . .

"[2 March] Planted the remainder of the Ash Trees—in the Serpentine walks—the remainder of the fringe trees in the Shrubberies—all the black haws—all the large berried thorns with a small berried one in the middle of each clump—6 small berried thorns with a large one in the middle of each clump—all the swamp red berry bushes & one clump of locust trees. . . .

"[3 March] Planted the remainder of the Locusts—Sassafras—small berried thorn & yellow Willow in the Shrubberies, as also the red buds— a honey locust and service tree by the South Garden House. Likewise took up the clump of Lilacs that stood at the Corner of the South Grass plat & transplanted them to the clusters in the Shrubberies & standards at the south Garden gate. The Althea trees were also planted. . . .

"Employed myself the greatest part of the day in pruning and shaping the young plantation of Trees & Shrubs. . . .

"[7 March] Planted all my Cedars, all my Papaw, and two Honey locust Trees in my Shrubberies and two of the latter in my groves—one at each (side) of the House and a large Holly tree on the Point going to the Sein landing. . . .

"[11 March] Planted . . . 13 Yellow Willow trees alternately along the Post and Rail fence from the Kitchen to the South ha-haw and from the Servants' Hall to the Smith's Shop....

"[24 March] Finding the Trees round the Walks in my wildernesses rather too thin I doubled them by putting (other Pine) trees between each.

"[8 July] Sowed one half the Chinese Seed given me by Mr. Porter and Doctr. Craik, in three rows in the Section next the Quarter (in my Botanical garden) beginning in that part next the garden Wall, and at the end next the Middle Walk. . . .

"[30 September] Began again to Smooth the Face of the Lawn, or Bolling Green on the West front of my House—what I had done before the Rains, proving abortive. . . .

"[28 October] Finished levelling and Sowing the lawn in front of the Ho[use] intended for a Bolling Green—as far as the Garden Houses." 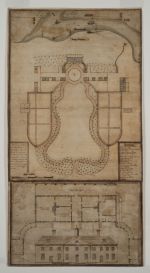 Fig. 1, Samuel Vaughan, Plan of the buildings and grounds of Mount Vernon, 1787.

"[25 January] And set about the Banks round the Lawn, in front of the gate between the two Mounds of Earth. . . .

"[13 March] The ground being in order for it, I set the people to raising and forming the mounds of Earth by the gate in order to plant weeping willow thereon....

"[6 April] Transplanted 46 of the large Magnolio of So. Carolina from the box brought by G. A. Washington last year—viz.—6 at the head of each of the Serpentine Walks next the Circle—26 in the Shrubbery or grove at the South end of the House & 8 in that at the No. end. The ground was so wet, more could not at this time be planted there....

"[11 April] In the Section in my botanical garden, next the House nearest the circle, I planted 4 Rows of the laurel berries in the grd. where, last year I had planted the Physic nuts &ca.—now dead & next to these in the same section are [ ] rows of the pride of China. The Rows of both these kinds are 16 inches asunder & the Seeds 6 inches apart in the Rows. . . .

"[19 June] A Monsr. Andri Michaux—a Botanest sent by the Court of France to America (after having been only 6 Weeks returned from India) came in a little before dinner with letters of Introduction & recommendation from the Duke de Lauzen, & Marqs. de la Fayette to me. He dined and returned afterwards to Alexandria on his way to New York, from whence he had come; and where he was about to establish a Botanical garden."

“Before the front of the house . . . there are lawns, surrounded with gravel walks 19 feet wide. with trees on each side the larger, for shade. outside the walks trees & shrubberies. Parralel [sic] to each exterior side a Kitchen Gardens. with a stately hot house on one side.” [Fig. 1]

"I hastened to arrive at Mount Vernon, the seat of General Washington, ten miles below Alexandria on the same river. On this rout you traverse a considerable wood, and after having passed over two hills, you discover a country house of an elegant and majestic simplicity. It is preceded by grass plats; on one side of the avenue are the stables, on the other a green-house, and houses for a number of negroe mechanics. In a spacious back yard are turkies, geese, and other poultry. This house overlooks the Potowmack, enjoys an extensive prospect, has a vast and elevated portico on the front next to the river, and a convenient distribution of the apartments within." 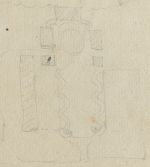 "From hence is one of the most delightfull Prospects I ever beheld. It had the Command of a View each way of some Miles up and down the River Potowmack whch [sic] is here about two Miles broad On which during the Summer there are constantly ships moving. The Hills arrownd it are coverd with plantations some of which have Elegant houses standing on them all of which being situated on Eminences form very beautifull Objects for each other."

"The general plan of the building is as at Mr. Man Pages at Mansfield near Fredericsburg, of the old School. . . . The center is an old house to which a good dining room has been added at the North end, and a study &c. &c., at the South. The House is connected with the Kitchen offices by arcade. . . . Along the other front is a portico supported by 8 square pillars, of good proportions and effect...The ground on the West front of the house is laid out in a level lawn bounded on each side with a wide but extremely formal serpentine walk, shaded by weeping Willows. . . . On one side of this lawn is a plain Kitchen garden, on the other a neat flower garden laid out in squares, and boxed with great precission. Along the North Wall of this Garden is a plain Greenhouse. The Plants were arranged in front, and contained nothing very rare, nor were they numerous. For the first time again since I left Germany, I saw here a parterre, chipped and trimmed with infinite care into the form of a richly flourished Fleur de Lis: The expiring groans I hope of our Grandfather's pedantry." [Fig. 2]

"In front, the breadth of the whole building, is a lawn with a gravel walk round it, planted with trees, and separated by hedges on either side from the farm yard and garden. As for the garden, it wears exactly the appearance of a nursery, and with every thing about the place indicates that more attention is paid to profit than to pleasure. The ground in the rear of the house is also laid out in a lawn, and the declivity of the Mount, towards the water, in a deer park."

"This hallowed mansion is founded upon a rocky eminence, a dignified height on the Potomac. During the French war, Admiral Vernon, who commanded the British fleet on this station, frequently made visits to his friend the father of Gen. W. and thence is derived its name. The additions of a piazza to the water front, and of a drawing room, are proofs of the legitimacy of the General's taste. It is now the residence of Judge Washington." [Fig. 3]

"Back of the mansion is a summer house, which commands an elegant view of the Potomac." [Fig. 4]

"The house fronts north-west, the rear looking to the river. In front of the house is a lawn, containing five or six acres of ground, with a serpentine walk around it, fringed with shrubbery, and planted with poplars. On each side of the lawn stands a garden; the one on the right is a flower-garden, and contains two green-houses (one built by General Washington, the other by Judge Washington,) a hot-house, and a pinery. It is laid out in handsome walks, with box-wood borders, remarkable for their beauty. It contains also a quantity of fig-trees, producing excellent fruit. The other is a kitchen-garden containing only fruit and vegetables.

"About two hundred yards from the house, in a southerly direction, stands a summer-house, on the edge of the river-bank, which is here lofty and sloping, and clothed with wood to the water's edge. The summer-house commands a fine prospect of the river and the Maryland shore; also of the White House, at a distance of five or six miles down the river, where engagement took place with the British vessels which ascended the river during the last war."

"At the extremity of these extensive alleys and pleasure-grounds, ornamented with fruit-trees and shrubbery, and clothed in perennial verdure, stands two hothouses, and as many green-houses, situated in the sunniest part of the garden, and shielded from the northern winds by a long range of wooden buildings for the accommodation of servants."

Categories:
This page was last edited on August 25, 2021, at 15:35.
Content is available under Creative Commons Attribution-NonCommercial-ShareAlike unless otherwise noted.
Terms of Use
Privacy Policy
A Project of the Center for Advanced Study in the Visual Arts
National Gallery of Art, Washington