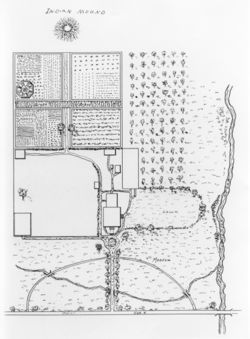 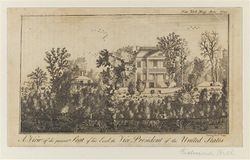 Cornelius Tiebout, A View of the present Seat of his Excel. the Vice President of the United States, 1790. The mount is at the far right. 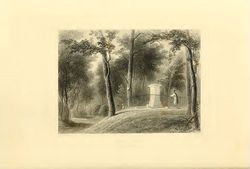 “[January 25] And set about the Banks round the Lawn, in front of the gate between the two Mounds of Earth. . . . [Fig. 4]
“[March 13] The ground being in order for it, I set the people to raising and forming the mounds of Earth by the gate in order to plant weeping willow thereon.”

“On one hand, the lovely valley richly shaded, is fancifully adorned, the mountain laurel condescending to flourish there—and on the other, grass grown mounds variegate the view. . . . At every turn shaded seats are artfully contrived, and the ground abounds with arbours, alcoves, and summer houses, which are handsomely adorned with odoriferous flowers. Among these the little federal temple claims the principal regard. It is the very edifice, that upon the celebration of the ratification of the constitution, was carried in triumphant procession through the streets of this metropolis; and, upon a gentle acclivity, upon the summit of a green mound infixed, it hath now obtained a basis.”

“In the Cherokee country, all over Carolina, and the Northern and Eastern parts of Georgia, wherever the ruins of ancient Indian towns appear, we see always beside these remains one vast, conical-pointed mound. To mounds of the kind I refer when I speak of pyramidal mounds. To the south and west of the Altamaha, I observed none of these in any part of the Muscogulge country, but always flat or square structures. The vast mounds upon the St. John’s, Alachua, d Musquito [sic] rivers, differ from those amongst the Cherokee with respect to their adjuncts and appendages, particularly in respect to the great highway or avenue, sunk below the common level of the earth, extending from them, and terminating either in a vast savanna or natural plain, or an artificial pond or lake. A remarkable example occurs at Mount Royal, from whence opens a glorious view of Lake George and its environs.
“Fig. 6 is a perspective plan of this great mound and its avenues, the latter leading off to an expansive savanna or natural meadow. A, the mound, about forty feet in perpendicular height; B, the highway leading from the mound in a straight line to the pond C, about a half a mile distant. . . . The sketch of the mound also illustrates the character of the mounds in the Cherokee country; but the last have not the highway or avenue, and are always accompanied by vast square terraces, placed upon one side or the other. On the other hand, we never see the square terraces accompanying the high mounds of East Florida.” [Fig. 5]

“The garden consists of nothing but a plain piece of ground, formerly quite level, but now made uneven and unmeaning by three artificial mounds. . . . The mounds which we have referred to have been thrown up, and thus remain, without any plantations of shrubs or trees to give a character to the garden, or hide the nakedness of these elevations, seeming more like heaps of earth accidentally placed there, and grown with turf, rather than the natural undulations of the surface. We can conceive of no worse taste than the execution of the work as it now is: the object of these mounds seems to have been to hide one part of the garden from another.”

“In level situations, where a drain cannot be conveniently dug out from the bottom of the pit; I should suppose it would answer very well to enclose the ice by a mound raised entirely above the surface of the earth, through which the water may be discharged. . . . This perhaps would not be quite so cool a repository as if under the surface of the earth; unless the mound was very thick; but I am persuaded that the loss of a few degrees in temperature bears very little proportion to the advantage resulting from dryness.”

Categories:
This page was last edited on March 16, 2021, at 13:08.
Content is available under Creative Commons Attribution-NonCommercial-ShareAlike unless otherwise noted.
Terms of Use
Privacy Policy
A Project of the Center for Advanced Study in the Visual Arts
National Gallery of Art, Washington