James Gibbs (December 23, 1682 – August 5, 1754) was a Scottish architect who trained in Rome and practiced mainly in England, developing a highly individual synthesis of the Italian Baroque and English Palladian styles. He is generally regarded as one of the most influential architects in eighteenth-century England, but his Book of Architecture (1728) was an influential source of designs for buildings and garden architecture in America as well. 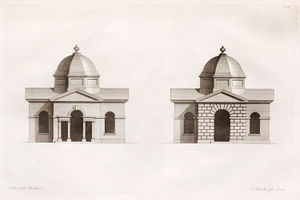 While still in his teens, Gibbs embarked on a tour of continental Europe, where he devoted several years to the study of architecture. He later wrote that he was “highly pleased with the fine Buildings, pictures, and Statues he saw in the great towns” of Italy, but that Rome “surpassed all the rest in Magnificence and grandeur.” [1] In 1705 Gibbs became a pupil of the important Roman Baroque architect Carlo Fontana (1638-1714), thus becoming the first British architect to receive professional training abroad. [2] From Fontana, Gibbs absorbed a high regard for classicism and the Antique, as well as a life-long interest in contemporary Roman architecture. After returning to Britain in 1708, Gibbs worked on a number of churches, chapels, and country houses before receiving the highly prestigious appointment in 1720 to rebuild the parish church of St. Martin-in-the-Fields in London. He consequently became, in the words of Horace Walpole, “the architect most in vogue” and his work inspired countless imitators. [3] Also in 1720 Gibbs submitted his first drawings for the Radcliffe Library at Oxford (1739-49), the building that would become the crowning achievement of his later career and the subject of a large folio volume of his designs, Bibliotheca Radcliviana (1747). In 1726 Gibbs succeeded Sir John Vanbrugh (c.1664-1726) as Viscount Cobham’s architect at the magnificent gardens at Stowe in Buckinghamshire. Collaborating with the landscape architects Charles Bridgeman (1690-1738) and Lancelot “Capability” Brown (1716-1783), Gibbs designed and erected ornamental pavilions and temples in an eclectic array of styles — neoclassical, Gothic, and rustic — during the periods 1726-28 and 1739-49. [4] Gibbs went on to work for several other aristocratic patrons for whom he designed country estates as well as a great variety of garden features, often modeled on classical precedents. For example, at Hackwood, the seat of the Duke of Bolton, he erected a rustic pavilion [Fig. 1] as a complement to an ornamental pond, and a round temple with a cupola and Doric peristyle [Fig. 2] as the crowning element of a semicircular rise of lawn bounded by elm trees to simulate the shape of an amphitheater. [5] Keeping pace with the growing taste for Palladian style, Gibbs carved out a role for himself as an innovator in the design of English classical villas. [6] 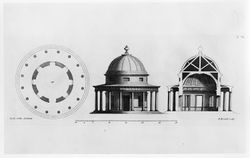 Such a work as this would be of use to such Gentlemen as might be concerned in Building, especially in remote parts of the country, where little or no assistance for Designs can be procured. Such may be here furnished with Draughts of useful and convenient Buildings and proper Ornaments; which may be executed by any Workman who understands Lines, either as here Design’d, or with some Alteration, which may be easily done by a person of Judgment. [7]

Indeed The Book of Architecture was among the most widely used architectural books of the eighteenth century and, together with Gibbs’s subsequent Rules for Drawing the Several Parts of Architecture (1732), served as a pattern book for architects, students, scholars, and builders, not only in Great Britain but as far afield as the United States and the West Indies. Both books were listed in the sale catalogues of American booksellers as early as 1760 [8] and in an advertisement published in the Maryland Gazette in 1751, the Virginia-born architect John Ariss (1725-1799) boasted of his ability to undertake buildings "of the Modern order of Gibbs’ Architect.” [9] Both The Book of Architecture and Rules for Drawing the Several Parts of Architecture inspired Thomas Jefferson’s early ideas for Monticello and were among the volumes from his personal collection that he sold to the United States government following the burning of the first Library of Congress in 1814. [10]

"Plate LXVII. The Plan, Upright and Section of a Building of the Dorick Order in form of a Temple, made for a Person of Quality, and propos’d to have been placed in the Center of four Walks; so that a Portico might front each Walk. Here is a large Octagonal Room of 22 feet and 26 feet high, adorn’d with Niches and crown’d with a Cupola. All the Ornaments of the Inside are to be of Plaister; and the Outside of Stone. . . .

"Plate LXX. A Pavillion design’d for Sir John Curzon for his Seat near Derby. It is a Cube of 20 feet, adorn’d with three Venetian Windows, circular Niches for Busto’s [sic], and an Entablature supported by Rustick Coines. There were two of them to have been built opposite to one another, on each side of a Vista proposed to be cut through a Wood, and to be terminated with an Obelisk upon a Hill fronting the House; the execution of which was prevented by Sir John’s Death....

"Plate LXXII. A circular Building in the form of a Temple, 20 feet in Diameter, having a Peristylium round it of the Dorick Order, and adorn’d with a Cupola; erected in his Grace the Duke of Bolton’s Garden at Hackwood, upon the upper ground of an Amphitheatre, back’d with high Trees that render the Prospect of the Building very agreeable.

"Plate LXXIII. Two Uprights of another Pavillion built at Hackwood. The Rustick Front looks upon a fine piece of Water, and the other on a beautiful Parterre....

"Plate LXXXVI. Three Draughts of Obelisques, more ornamental than the former: They keep the same Proportion with them; only that upon the left hand has four times the thickness of the Obelisque at bottom to the height of its Pedestal, because of the Ornaments upon it the top part may be made in the manner here drawn, or with other Ornaments at discretion. The Antients [sic] never placed their Obelisques upon moulded Bases; but Dominico Fontana and others have placed them upon Bases, which, in my opinion, is a great addition to their beauty, however that may be done or not at pleasure.

"Plate LXXXVII. Three Designs for Columns, proper for publick Places or private Gardens; viz. a plain Dorick Column upon its Pedestal with a Vase a top, a fluted Column properly adorn’d, and a Rustick frosted Column, with a Figure a-top, as I have made them for several Gentlemen. The Proportions of them are mark’d upon an upright Line, divided into so many Diameters of the Column for the Height....

"Plate CXXXVIII. Three Designs for Vases, done for the Right Honourable the Earl of Oxford. There are two Vases well executed in Portland Stone according to the middle Draught, which are set upon two large Peers on each side of the principal Walk in the Garden at Wimpole in Cambridgeshire.

"Plate CXXXIX, CXL, CXLI, CXLII, CXLIII, CXLIV. Fifty four Draughts of Vases, &c. in the Antique manner, made for several persons at different times. Many of them have been executed both in Marble and Metal."

Category:
This page was last edited on January 21, 2016, at 12:40.
Content is available under Creative Commons Attribution-NonCommercial-ShareAlike unless otherwise noted.
Terms of Use
Privacy Policy
A Project of the Center for Advanced Study in the Visual Arts
National Gallery of Art, Washington