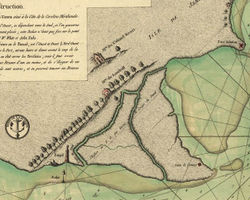 Following a series of fiery sermons preached in her native Boston by the English evangelist George Whitefield (1714–1770), fourteen-year-old Elizabeth Pitts journeyed to Savannah, Georgia, and entered Whitefield’s Bethesda Orphan House on December 13, 1740.[2] She was one of a handful of girls who were not orphans, but merely “poor,” with one or more parent still living.[3] At the Bethesda Orphan House, she received instruction in religion, Latin, arithmetic, writing, and reading. She also learned household skills intended to make her “serviceable,” such as sewing, spinning, and “housewifery.”[4] The seeds of her later fascination with gardening may have been planted at Bethesda. According to the English writer Edward Kimber (1719–1769), who visited the Bethesda Orphan House in 1743, the girls’ “vacant Hours were employ’d in Garden and Plantation-Work.” Kimber described the garden as “a very extensive one, and well kept up, . . . one of the best I ever saw in America.”[5] After leaving the orphanage in June 1742, Elizabeth probably went into service in Charleston.[6] There, on November 29, 1744, she married Thomas Lamboll, a wealthy, well-educated merchant whose second wife had died the previous year.[7] Lamboll was a prominent public figure, having served for many years as justice of the peace and clerk of the Congregational Church.[8] He also owned extensive property in and around Charleston, including a rice plantation across the Ashley River on James Island, acquired by his father in 1696.[9] A French map of 1776 represents avenues of trees leading to a two-story house on the property [Fig. 1]. 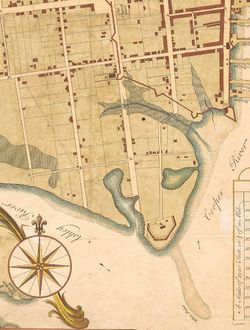 Fig. 2, “G. H.” (probably George Hunter, Surveyor-General of Carolina), The Ichnography of Charles-Town at High Water [detail], 1739. The southern tip of Charleston is shown at the confluence of the Ashley River and Cooper River. At "P," the pentagonal wall and building denote Broughtons Battery, near where Thomas Lamboll commissioned his plantation house.

“I have Just been on James island with Thomas Lambol & his lady to his countrey seat oposit to Charlstown. . . .This day I spent in writeing letters & observing ye fine improvements of ye town & ye adjacent countrey seats.”

“We observed many good farms & gentlemens seats. . . . Landed at Charlstown . . . & walked to our friend Lambols where we was accommodated in ye most civil & best manner. in A large chamber. one side fronting ye street with a large window & balcony with A prospect down ye bay [;] ye south side fronting ye garden & orange walks over which A lovely prospect apeared of James island over Ashley river[,] two mile broad[,] from two large windows[.] ye farther end of his garden reaches to within A few yards of ye rivers bank; ye north front hath A fine prospect of ye town through two large windows.”