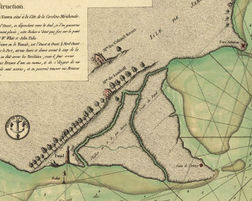 Following a series of fiery sermons preached in her native Boston by the English evangelist George Whitefield (1714-1770), fourteen-year-old Elizabeth Pitts journeyed to Savannah, Georgia and entered Whitefield’s Bethesda Orphan House on December 13, 1740.[2] She was one of a handful of girls who were not orphans, but merely "poor," with one or more parent still living.[3] At the Bethesda Orphan House, she received instruction in religion, Latin, arithmetic, writing, and reading. She also learned household skills intended to make her “serviceable," such as sewing, spinning, and "housewifery."[4] The seeds of her later fascination with gardening may have been planted at Bethesda. According to the English writer Edward Kimber (1719-1769), who visited the Bethesda Orphan House in 1743, the girls' "vacant Hours were employ'd in Garden and Plantation-Work." Kimber described the garden as "a very extensive one, and well kept up, ...one of the best I ever saw in America."[5] After leaving the orphanage in June 1742, Elizabeth probably went into service in Charleston.[6] There, on November 29, 1744, she married Thomas Lamboll, a wealthy, well-educated merchant whose second wife had died the previous year.[7] Lamboll was a prominent public figure, having served for many years as justice of the peace and clerk of the Congregational Church.[8] He also owned extensive property in and around Charleston, including a rice plantation across the Ashley River on James Island, acquired by his father in 1696.[9] A French map of 1776 represents avenues of trees leading to a two-story house on the property. [Fig. 1]

Around the time of Lamboll's first marriage in 1737 to Margaret Edgar (1711-1742), he had commissioned the architect Thomas Lee (1710-1769) to build a house in Charleston on property he owned at the southernmost point of the city, bounded on the west by the Ashley River and on the east by the Cooper River.[10] [Fig 2] Lamboll may have laid out gardens as well, for he began importing plants, such as the Pride of India, or Chinaberry (melia azedarach), which he is credited with introducing to North America.[11] By the early 1740s he was corresponding with the English merchant Peter Collinson, to whom he sent Carolina plants in exchange for exotic specimens imported from Europe.[12] 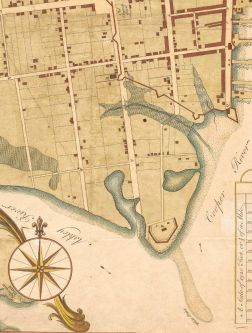 Reflecting on the many additions to his garden that came through Lamboll, Collinson observed in a letter of 1764 to Cadwallader Colden, “How Fragrant that Allspice, how Charming the Red flowered Acacia, Great Laurel Leafed Magnolia & Umbrella Magnolia & Loblolly Bay — these Charming Trees are the Glory of my Garden & the Trofies of that Friendship that subsists between Mee & my very obligeing Friend T. Lambol Esq of South Carolina."[13]

Categories:
This page was last edited on September 16, 2021, at 18:03.
Content is available under Creative Commons Attribution-NonCommercial-ShareAlike unless otherwise noted.
Terms of Use
Privacy Policy
A Project of the Center for Advanced Study in the Visual Arts
National Gallery of Art, Washington