Cadwallader Colden (February 7, 1789–September 20, 1776), a Scottish physician and natural scientist, cultivated a garden at his country seat near the Catskill mountains of New York, where he conducted the first systematic, scientific documentation of plants native to that region. Through an extensive correspondence and botanical exchange with eminent European botanists, he disseminated information about hitherto unknown North American plants. He is considered the founder of the canal system in America.

While studying for the ministry at the University of Edinburgh from 1703 to 1705, Colden learned the rudiments of botany from Professor Charles Preston (1660–1711), Keeper of the Town’s Garden and the College Garden.[1] He went on to study medicine in London, but finding little opportunity for employment in Great Britain, he decided to seek his fortune in America. Settling in Philadelphia in 1710, he supplemented the income from his medical practice through trade with the West Indies, traveling to Jamaica, Barbados, Antigua, and Charleston.[2] He imported a variety of goods—including wine, rum, sugar, flour, and medicine—and also acquired a family of slaves from Barbados.[3] A chance encounter in 1718 with Robert Hunter (1664–1734), Governor of New York, resulted in Colden’s appointment as Surveyor of Lands in New York (1720–1762), a position that required pioneering exploration of the colony. Colden gathered botanical specimens during his travels, producing in 1725 “An Account of some plants the seeds of which were sent to Brigadier [Robert] Hunter at his desire for the Earl of Islay.”[4] He later reported to the Swedish botanist Peter Kalm, that soon after arriving in America, he “became inquisitive into the American plants but they were then so little known & I had so little assistance from my books that I was soon discouraged in that study.”[5] 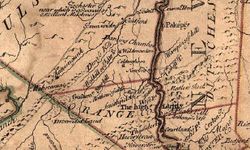 In 1722 Colden acquired 3,000 acres of remote, uninhabited wilderness in the Hudson Highlands region of New York, about 70 miles north of New York City [Fig. 1], where he built a small stone house to accommodate his brief visits.[6] He also laid out a kitchen garden, established a nursery, and cultivated apples, cherries, pears, nectarines, and peaches in an orchard that also served as a burying ground.[7] He drained swampland into a pond and created a freshwater canal to facilitate transportation of materials across his extensive property.[8] By 1732 his household included four enslaved men and two enslaved women, and he also employed waged laborers, hiring the owners of neighboring small farms (many of them recent Irish immigrants) to assist with the harvest and perform other work as needed.[9] In a letter of c. 1731 to the British merchant Micajah Perry (1644–1721), Colden complained of “the dearness of Labour & want of hands,” noting that white settlers came to America in order to become landowners, not to work others’ farms, and slaves were time-consuming to train and make “fit for the labour of the Country which requires skill and dexterity . . . whereas in the West Indies & Virginea also little more is requisite but stren[g]th & a little [skill] in using a how [hoe].”[10]

In 1755 Cadwallader Colden resolved “to retire from business, & to indulge the remainder of life in more agreeable pursuits,”[21] but Coldengham’s vulnerability to attack by French and Indian forces at war with Britain convinced him to evacuate his family in 1756.[22] In 1761 he was appointed lieutenant governor of New York, and the following year he acquired a 120-acre estate in Flushing, Long Island, where he immediately laid out a garden and built a house, naming the estate Spring Hill.[23] As colonial opposition to British rule increased during the 1760s and 70s, Colden faced great hostility as an officer of the Crown. Burned in effigy during protests over the Stamp Act in 1765, he retreated to Spring Hill, which became a place of refuge in tumultuous times. He was buried there in 1776 in an old cemetery demarcated by “a few large boulders imbedded in the earth.”[24] Within a century, vegetation had entirely overtaken the burying ground, leaving no trace of Colden’s grave. In 1817 the New York Historical Society reported its acquisition of an herbarium containing “many of the plants of this and the neighboring states, preserved and arranged by Cadwallader Colden.”[25]

“I have met w[i]t[h] very Little new in the Botanic way unless Your acquaintance Bartram, who is what he is & whose acquaintance alone makes amends for other disappointments in that way. . . . One Day he Dragged me out of town & Entertain’d me so agreably with some Elevated Botanicall thoughts, on oaks, Firns, Rocks & c that I forgot I was hungry till we Landed in his house about four Miles from Town. . . .

“On Thursday last it was opened to view, erect on its proper pedestal in a square near the fort, and fronting the principal Street of the City. . . .

Category:
This page was last edited on September 8, 2021, at 20:02.
Content is available under Creative Commons Attribution-NonCommercial-ShareAlike unless otherwise noted.
Terms of Use
Privacy Policy
A Project of the Center for Advanced Study in the Visual Arts
National Gallery of Art, Washington