HEALD will be upgrading in spring 2021. New features and content will be available this summer. Thank you for your patience!
Last modified on 28 January 2016, at 14:08

The origins of Ashley Hall date from 1670, when Stephen Bull (d. 1706) arrived in Carolina with the intention of trading British millinery goods with Native Americans. [1] He also served as deputy to Lord Ashley (1621-1683), one of the eight Lords Proprietor of the Province of Carolina. Among the earliest English settlers in the colony, Bull assisted in selecting the site of Charles Town (later, Charleston), and helped found the first permanent European settlement there. [2] Appointed surveyor of South Carolina in 1673, he laid out new fortification lines around Charleston in 1674 and was appointed surveyor general ten years later. [3] Bull played a prominent role in many aspects of Carolina government and military affairs, establishing a precedent followed by subsequent generations of his family. He also paved the way for them in his enthusiastic pursuit of science, engineering, agriculture, exploration, and diplomatic relations with the Indian population. [4] 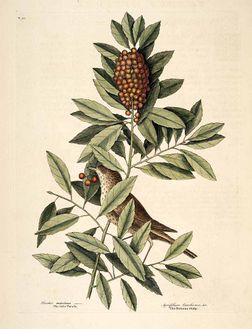 Bull settled on land a few miles west of peninsular Charleston along a wide river, later named the Ashley. In 1676 he received a formal grant of 400 acres there, and an additional 100 acres of adjoining property in 1694. [5] Bull pioneered the cultivation of rice on his plantation, and also conducted some of Carolina's earliest agricultural experiments in growing tobacco, indigo, ginger, and potatoes. [6] The small, one-story, tabby-walled house that he built ca. 1675 — one of the oldest extant buildings in South Carolina — was succeeded in 1704 by a larger, but still quite modest two-story brick house, built for his son, William (1683-1755) [Fig. 1].[7] William Bull resembled his father in serving in a number of important official capacities, including Lord Proprietor’s deputy (1719), Commissioner of Indian Affairs (1721), and lieutenant governor (1737-1755). A trained surveyor, he assisted General James Edward Oglethorpe (1696 -1784) in settling Georgia and selecting the site of Savannah. [8]

In 1722 the English naturalist Mark Catesby visited him at Ashley Hall, and, according to the Charleston artist Charles Fraser, Catesby "planted by his hand" an avenue of live oaks leading from an orchard of pear trees to the house [Fig. 2]. [9] In the first volume of his Natural History, Catesby illustrated the evergreen dahoon holly (illex Cassine L.), which he described as "a very uncommon Plant in Carolina, I having never seen it but at Col. Bull’s Plantation on Ashley River, where it grows in a Bog." [10] [Fig. 3] Fifteen years later, the Anglican divine John Wesley noted other rarities at Ashley Hall. Declaring the estate "the pleasantest place I have yet seen in America," he observed that the orchard and garden abounded with "those sorts of trees and plants and flowers which are esteemed in England," but which American colonists rarely took the trouble to cultivate (view text).

In 1742 William Bull transferred much of the Ashley Hall property (including the two houses) to his son, William Bull II, who in 1770 laid out gardens interlaced with serpentine paths between the house and the water's edge.[11] A long, straight avenue bisected the garden, affording an uninterrupted vista of the Ashley river and the city of Charleston beyond. It may have been at this time that broad lawns were planted on either side of Catesby's oak-lined avenue. A lake bounded by cypress trees lay to one side of the house, abutting an open park and elk and deer parks. The property also featured a pool encircled by cypress trees and a statue of Diana atop a prehistoric Indian mound. [12] Following Bull's death in 1791, his widow erected a monumental obelisk in his memory on the grounds [Fig. 4]. [13]

Ashley Hall's strategic riverine location exposed it to abuse during the Revolutionary War. Errant British troops "plundered and greatly damaged" the property in June 1777. Five years later, the Continental Army general Nathaneal Greene (1742-1786) commandeered Ashley Hall as his headquarters.[14] The last member of the Bull family to own Ashley Hall, Col. William Izard Bull, added a piazza and circular red stone steps to the house in 1853. [15] An English visitor reported spending “a delightful day” with Col. Bull at Ashley Hall in 1863, “roaming over cotton-fields and rice plantations, woods, and 'park-like meadows,' studded with the most magnificent live oaks,” and sampling the indigenous Scuppernong grapes that grew in the garden. [16] Bull intentionally set the house on fire during the winter of 1865, destroying the building and all of its contents, rather than allow his ancestral home to be desecrated by approaching Union troops. [17]