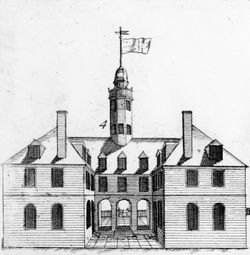 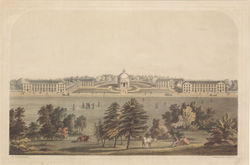 The arcade form derived from antiquity and had been revived in the modern era, particularly in the work of Italian architect Andrea Palladio. From the late seventeenth century onward, Palladian-inspired architecture spread throughout continental Europe, England, and America, popularized in part through pattern books, which often feature the arcade form. The Capitol in Williamsburg, which utilized an arcade to link the two wings of the building, served as a model for several eighteenth-century public buildings in Virginia [Fig. 1].[1] Arcades were also found in early nineteenth-century campus designs, such as Joseph Jacques Ramée's plan for Union College in Schenectady, N.Y., and Thomas Jefferson's work at the University of Virginia, both of which became important precedents in this field [Figs. 2 and 3]. Here arcades helped to establish the framework of the campus and to enclose and define common space. A number of significant and well-known private dwellings, including Mount Vernon, Peacefield, and the White House also included arcades that made direct reference to Palladian designs and became models for subsequent builders, even up to the present day.

Arcades also operated as viewing platforms, much like porches, pavilions, and other covered garden structures. In A. J. Downing's designs, for example, arcades were often placed where porches or verandas might also be situated. In fact, the term "arcade" was often elided with "porch" or "veranda." A covered, open-air extension of the house, the arcade was also similar to a piazza, and structures resembling arcades in the colonial period were often referred to as piazzas. A case in point is an example from Batty Langley's Gothic Architecture (1747), a publication that was available in America by the end of the eighteenth century [See Fig. 9].

"Harmony Hall. THEATRICAL REPRESENTATIONS being prohibited by a late Act of the Legislature, Mr. Godwin, most respectfully acquaints his friends, and those Ladies and Gentlemen who have kindly patronized him, that his lease of the lot of land whereon the building called Harmony-Hall now stands, will not expire for some time; therefore, he is converting the house into an Assembly Room. . . . ALSO, FOR CONCERTS . . . And Dancing. An excellent floor is to be laid over that part formerly called the Pit.—The side boxes will be turned to ARBOURS—the front boxes into an ARCADE—where the company may sit during the music, and enjoy the innocent, natural amusements of tea, cooling liquors, cold collation, &c." 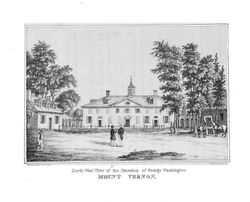 Fig. 6, Anonymous (artist), A. Kollner (lithographer), "North West View of the Mansion of George Washington Mount Vernon," in Franklin Knight, ed., Letters on Agriculture from His Excellency George Washington (1847), opp. p. 124. Back up to history

"The palace is a building erected by the province before the Revolution—It is a large and elegant brick Edifice two Stories high, with two Wings for the offices, somewhat advanced in front towards the Road, these are also two Stories high but lower in height than the main Building, these Wings are connected with the principal Building by a circular arcade from each of the front Corners to the corner of the Wing."

"The State-House is fifty feet in width, fifty in height, and one hundred and thirty in length. . . . From each front, finished with iron gates, projects an open arcade, sixteen feet wide, and forty long." 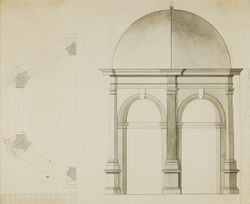 "The general plan of the building is as at Mr. Man Pages at Mansfield near Fredericsburg, of the old School. . . . The center is an old house to which a good dining room has been added at the North end, and a study &c. &c., at the South. The House is connected with the Kitchen offices by arcades." [Fig. 7]

"After a short introductory conversation, he invited us to accompany him to his garden, before the day closed in, and we readily attended him there. This covered about an acre and half of ground, and was neatly laid out in lawns, arbours, and flower-beds, with two prettily ornamented open octagonal arcades, each supporting a circular dome over a fountain." [Fig. 7]

"Its ribbed roof is supported by a tasteful series of columns and arches, in the style of an Italian arcade. As it is on the north side of the dwelling, its position is always cool in summer; and this coolness is still farther increased by the abundant shade of tall old trees, whose heads cast a pleasant gloom, while their tall trunks allow the eye to feast on the rich landscape spread around it." [Fig. 8] 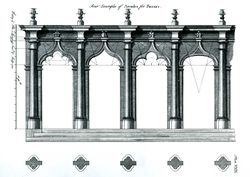 Fig. 9, Batty and Thomas Langley, "Four Examples of Arcades for Piazza's," in Batty Langley, Gothic Architecture (1747), pl. 29. Back up to history

"XXIX. Arcades for Piazzas, with the Geometrical Construction of their Curves." [Fig. 9]

"Arcade, a Range of Arches with open Places to walk, as that of Covent Garden, the Royal Exchange, &c."

"Arcade. A series of arched openings, with a roof or ceiling." 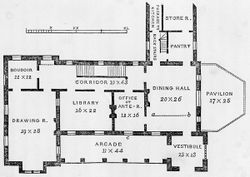 "As a marked defect in this design . . . was the absence of all veranda, arcade, or covered walk—without which no country-house is tolerable in the United States, we have added a veranda in the angle between the library and drawing-room. . . .

"We see refined culture symbolized in the round-arch, with its continually recurring curves of beauty, in the spacious and elegant arcades, inviting to leisurely conversations, in all those outlines and details, suggestive of restrained and orderly action, as contrasted with the upward, aspiring, imaginative feeling indicated in the pointed or Gothic styles of architecture. . . .

"[Referring to Design XXXII.] Standing in the middle of the vestibule, the arcade extends to the drawing-room, affording a broad and airy promenade, nearly 60 feet long, sheltered from sun and rain." [Fig. 10]

Categories:
This page was last edited on February 11, 2021, at 11:33.
Content is available under Creative Commons Attribution-NonCommercial-ShareAlike unless otherwise noted.
Terms of Use
Privacy Policy
A Project of the Center for Advanced Study in the Visual Arts
National Gallery of Art, Washington