An arboretum was a botanic garden of trees, shrubs, and woody vines. Organized according to scientific or aesthetic principles, or a combination of these, arboreta were founded for public, private, and institutional purposes in America during the colonial and early national period. Some arboreta comprised collections of all indigenous trees while others were composed of a particular genus, such as pines (this type of arboretum was also called a pinetum). For example, the Pierce Brothers Arboretum in East Marlborough, Pa., was primarily an evergreen collection. Jane Loudon offered several organizing principles for both public and private gardens in Gardening for Ladies (1845). After the turn of the nineteenth century, when public gardens and civic beautification campaigns flourished, arboreta became increasingly popular. Planting and preserving trees were seen as a part of America's need to plan for future generations, as George William Johnson discussed in A Dictionary of Modern Gardening (1847) (view citation). 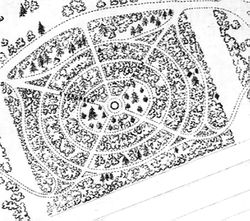 In his 1851 plan for the national Mall in Washington, D.C., A. J. Downing called the area a "public museum of Trees" rather than an arboretum.[1] The description of his design, however, concurred exactly with the content of his other writings on arboreta. He planned to convert the whole Mall "into an extended landscape garden, to be . . . planted with specimens properly labelled, of all the varieties of trees and shrubs that flourish in this climate" [Fig. 2].[2] The parallel of the museum and the arboretum also was expressed in a statement in 1847 by J. Jay Smith, who was a frequent correspondent in Downing's Horticulturist (view citation).

Scientific institutions were motivated to collect and study woody plants not only to add to the knowledge of the natural world, but also to classify and claim them as an American resource. Often associated with departments of botanical studies or schools of medicine, arboreta were founded at several of the early American schools and colleges, such as Vassar College in Poughkeepsie, N.Y., Haverford and Swarthmore Colleges in Pennsylvania, and Transylvania College in Lexington, Mass. The medicinal properties of native and imported plants remained an essential part of medical training into the twentieth century (see Botanic garden).

In addition to public and institutional arboreta, private arboreta ornamented the grounds of many estates in the late eighteenth and early nineteenth centuries, where the wealthy displayed their collecting prowess and acumen. Collections of rare trees and shrubs were valuable not only for their scientific and ornamental interest but also for economic reasons. Although America’s forests seemed inexhaustible to many, plantations of trees were highly valued during the colonial period. In the early republican period when people began to think of themselves as Americans and not simply as English living abroad, figures such as Thomas Jefferson and later Downing championed American trees as a great source of pride and wealth for the young nation. Several years later, Jefferson decried the “unnecessary felling of a tree,” as a criminal act, “little short of murder.” [3] As Downing wrote, “Not to wish to know something of the character and history of trees, is as incomprehensible to us; as not to desire a knowledge of Niagara.” [4]

“it would be easy in a few years to have within our enclosure, a specimen of every tree that will live in this climate, and I know of no spot near Philadelphia, where a complete arboretum could be established with less trouble, or be a subject of greater interest or more utility than upon the 41 acres which compose our pleasure ground.”

“Laurel Hill is especially rich in rare trees. We saw, last month, almost every procurable species of hardy tree and shrub growing there—among others, the Cedar of Lebanon, the Deodar Cedar, the Paulownia., the Araucaria, etc. Rhododendrons and Azaleas were in full bloom; and the purple Beeches, the weeping Ash, rare Junipers, Pines, and deciduous trees were abundant in many parts of the grounds. Twenty acres of new ground have just been added to this cemetery. It is a better arboretum than can easily be found elsewhere in the country.” [Fig. 4]

“ARBORETUM is a collection of trees and shrubs capable of enduring exposure to our climate. These are usually arranged in genera according to their precedence in the alphabet; or in groups conformably to the Jussieuean system; and whichever is adopted it is quite compatible with an attention to facility of access by means of walks, as well as to picturesque effect.
“It is an evil growing out of the frequent change in the ownership of estates, that most proprietors are indisposed to plant for posterity; consequently we see but few grounds laid out with a view to permanent improvement. Those who plant are anxious themselves to reap the fruits of their exertions, not knowing, and consequently careless, who shall succeed them—where landed property is, by entail, transmitted from generation to generation, family pride, and the love of distinction, ensure every improvement being made in a permanent form—thus have been created the magnificent parks of Europeans, and their stately mansions. Our American system deprives us of such monuments of taste—but we can bear the deprivation, seeing the greater good produced thereby.”

“With all our truly fine sylvan scenery, there are none of your readers, who have not seen the thing for themselves, that know how properly to rate the enjoyment of those collections of fine ornamental trees which the English make at their country places, under the name of ARBORETUMS. It is for a country residence, what a museum, or rich collection in natural history or art, is for a town house; a source of interest perpetual and unvarying. Many a person (and there are, I am sorry to say, such in all countries,) to whom trees are only trees—that is, green things in the landscape, in which they perceive little distinction—are immediately struck and interested in a country place by an arboretum—that is, a collection of trees properly arranged on a large lawn, each genus, with all its varieties, near each other, so as to show off their contrasts and individualities to the highest advantage. Such a park or lawn soon seizes upon the mind and attracts it; almost insensibly one is led to compare forms and developments; and very quickly he who knew little and cared less about trees, finds himself acquiring the acquaintance of the most distinguished botanical families!”

“ARBORETUM, n. A place in a park, nursery, &C, in which a collection of trees, consisting of one of each kind, is cultivated. Brande”

Category:
This page was last edited on February 3, 2021, at 16:30.
Content is available under Creative Commons Attribution-NonCommercial-ShareAlike unless otherwise noted.
Terms of Use
Privacy Policy
A Project of the Center for Advanced Study in the Visual Arts
National Gallery of Art, Washington