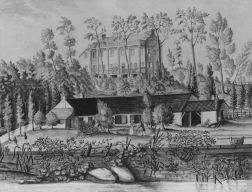 Whereas her husband commented frequently on the spectacular natural scenery, her drawings focused on the transformation of the American wilderness into a domesticated environment through the development of towns and country estates. She sketched the homes of several of her friends (many of them also French émigrés), including General Jean Victor Marie Moreau [Fig. 1] and the industrialist and amateur botanist Éleuthère Irénée du Pont [Fig. 2]. She made botanical studies of plants encountered on her travels, carefully recording, for example, a pale purple flower spotted on the banks of the Brandywine River during a visit to DuPont’s house and powder mill on September 6, 1810 (New York Historical Society). After purchasing land on the Genessee River in New York State, the Hyde de Neuvilles established a farm called La Bergerie (“The Sheep Farm”). They spent winters in New York City, where they founded the École Économique, a school for French refugee children. [4] In 1811 the couple purchased land outside New Brunswick, New Jersey. There, they built a house and—in emulation of DuPont—raised Merino sheep, a type recently introduced to America, whose extremely fine fleece had launched a “Merino craze.” [5] 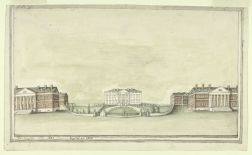 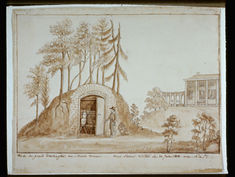 Although her many social and diplomatic engagements led to a decline in the volume of sketches, Hyde de Neuville continued to document highlights of her American experience. These ranged from an unusual flower specimen presented to her in 1816 by the Portuguese botanist and friend of Jefferson, José Correia da Serra (1750-1823) (New York Historical Society), to a drawing of the original family burial vault of George Washington at Mount Vernon, which had become a national shrine in the decades that preceded monuments to the deceased president in Baltimore and Washington [Fig. 4]. [8] Hyde de Neuville’s husband shared her interest in documenting aspects of the New World. In 1816, he commissioned a number of French naturalists-- Jacques Gérard Milbert (1766-1840), Charles Alexandre Lesueur, and two graduates of the École Économique, Philippe (1800-1899) and Alexandre (1798-1876) Ricord—to collect specimens of indigenous American botanical and zoological specimens for the Museum of Natural History in Paris. [9] --Robyn Asleson

This page was last edited on February 26, 2015, at 14:39.
Content is available under Creative Commons Attribution-NonCommercial-ShareAlike unless otherwise noted.
Terms of Use
Privacy Policy
A Project of the Center for Advanced Study in the Visual Arts
National Gallery of Art, Washington