Andrew Gentle (fl. 1800-1841), a British-born seedsman and gardener, laid out and managed the Elgin Botanic Garden in New York City, where he also operated a commercial trade in seeds and plants. 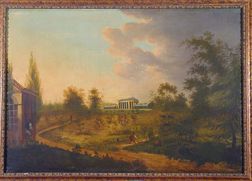 By his own account, Andrew Gentle was "brought up to horticultural work, in all its departments"[1]— possibly as a member of the Gentle family of Peebles, Scotland, proprietors of a multi-generational commercial practice as nursery- and seedsmen.[2] After managing "two very extensive establishments" in Britain for six years, Gentle immigrated to the United States, where, as he recorded in his book Every Man His Own Gardener (1841), he "commenced operations for Dr. Hosack, in New-York, by laying out his grounds" in 1805 (view text). By "grounds," Gentle presumably meant the twenty-acre property on which Hosack, in his capacity as professor of botany and materia medica at Columbia College, was developing a botanic garden as a teaching aid. [Fig. 1] Soon after purchasing the property in 1801, Hosack had begun "to collect and cultivate the native plants of this country, especially such as possess medicinal properties, or are otherwise useful."[3] He later reported having "in cultivation at the commencement of 1805, nearly fifteen hundred American plants, besides a considerable number of rare and valuable exotics." More progress had been made by 1806: "the greater part of ...[the twenty acres] is now in cultivation," Hosack reported in that year, and "a Conservatory, for the more hardy green-house plants, has been built; in addition to which, two Hot-Houses are now erecting for the preservation of those plants which require a greater degree of heat."[4] 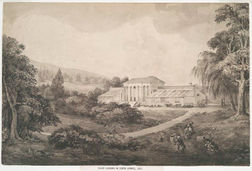 Despite so much progress on other fronts, the grounds themselves had yet to be laid out, according to Hosack, who promised readers of his Catalogue of Plants Contained in the Botanic Garden at Elgin (1806): "The grounds will be arranged in a manner the best adapted to the different kinds of plants, and the whole enclosed by a belt of forest trees and shrubs, native and exotic."[5] [Fig. 2] It is unclear whether Andrew Gentle contributed to the design of the Elgin Botanic Garden, or if "laying out [the] grounds" referred only to implementing an existing plan. In either case, the price of his work figured among a number of costs that exceeded Hosack's expectations. In 1805 and again in 1806, Hosack appealed to the New York legislature for financial support, as “The expenses necessary to effect these improvements, especially in the cultivation and arrangement of the grounds, and in erecting the buildings, [were] greater than what I had anticipated."[6] Perhaps in order to offset these expenses, Gentle for a time operated a commercial market at the garden in addition to maintaining botanical specimens for scientific study. In 1807 he published an advertisement clarifying that the Elgin Garden was not only intended for the edification of medical students, but could also provide citizens with "the best vegetables for the table," along with "medicinal Herbs and Plants, and a large assortment of green and Hot House Plants" (view text).

Gentle may have left the garden in 1809, when Frederick Pursh began a brief stint as gardener at Elgin, succeeded by Michael Dennison less than two years later.[7] Hosack turned to both Gentle and Pursh for their assistance in assessing the monetary value of the garden in January 1810, when financial necessity compelled him to offer it for sale to the New York legislature. Gentle's estimate of $14,380.59 for the "indigenous and exotic plants, tools &c." (view text) was over $1,700 higher than the estimate Pursh developed in partnership with two nurserymen (view text), and perhaps reflects Gentle's more intimate and sustained familiarity with the garden and its history. In March 1811, Hosack published Hortus Elgeninsis (1811), a revised and enlarged catalogue of the Elgin Botanic Garden. Although Gentle's name had not appeared in the first version of the catalogue, published in 1806, Hosack now listed "Mr. Andrew Gentle, seedsman, of this city" among "several gentlemen in this country, distinguished for their taste and talents in this department of science" who were "among the contributors to this institution." The impressive list of American horticulturists and botanists included Samuel Latham Mitchill, Bernard M'Mahon, William Darlington,and William Prince (view text). In 1815 Gentle and Michael Dennison were two of only four seedsmen listed in the New York Directory (along with 53 gardeners and one nurseryman), Gentle describing himself as "Florist and Seedsman."[8] The advertisements Gentle placed in the Evening Post in 1815 offered "a general assortment of kitchen, garden, [and] flower seeds," adding that "Catalogues can be had at the store gratis" (view text). 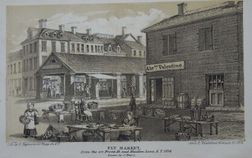 In March 1817 Gentle leased the property on an annual basis in exchange for maintaining the greenhousess and grounds.[9] The garden had declined over the past several years while it passed from the custody of the state legislature to the College of Physicians and Surgeons, to Columbia College. Increasingly concerned by its neglect, David Hosack was momentarily reassured by Gentle's arrival on the scene. In a report read before the New York-Historical Society on April 8, 1817, Hosack noted the garden's receipt of "a large collection" of European seeds from Thomas Jefferson and Monsieur [André] Thouin of the Jardin des Plantes in Paris, adding: "Those seeds have all been conveyed to the Botanic Garden, where, in the hands of the present curator, Mr. Andrew Gentle, they will doubtless be cultivated with great care and fidelity."[10] Gentle's lease of the botanic garden was renewed for several years, and in advertisements that appeared in the New York Evening Post from April 1817 to October 1820, he offered seeds and plants for sale both at the Elgin Botanic Garden and at his shop in Water Street near the Fly Market at the foot of Maiden Lane. [Fig. 3] The function of Elgin as a botanical garden was undeniably in decline, however. In May, 1819, the greenhouse plants along with "ornamental trees" and shrubs were transferred to the New York Hospital. Gentle's lease had ended by 1823 when the grounds were rented to J. B. Driver for five years.[11]

Gentle maintained his shop at the southern tip of the city (the present-day financial district) even after the Fly Market closed in 1823, thereafter giving his address as Maiden Lane. The range of his activities went well beyond that of seedsman. For example, in the spring of 1829, Adriance Van Brunt hired him to graft cherry trees.[12]

Nevertheless, his affiliation with David Hosack's garden appears to have been a high point of his career. Years later, in Everyman His Own Gardener, Gentle would describe himself as "late curator of the Elgin Botanic Garden," as well as corresponding member of the London Horticultural Society and member of the Horticulturist Society New York.

“As it was the original design in forming this establishment to render it not only useful as a source of instruction to the students of medicine but beneficial to the public by the cultivation of those plants useful in diseases, by the introduction of foreign grasses, and by the cultivation of the best vegetables for the table; our citizens are now informed that they can be supplied with medicinal Herbs and Plants, and a large assortment of green and Hot House Plants etc.”

“The sum of fourteen thousand three hundred and eighty dollars and fifty-nine cents, is, I believe, to the best of my judgment, the value of your indigenous and exotic plants, tools, & c. at Elgin."

“We, the subscribers, in committee assembled, for the valuation of the plants, trees, and shrubs, including garden tools and utensils, necessary for the cultivation of the same, as appertaining to the green house, hot houses, and grounds of the [botanic garden]], at Elgin, after a very particular inventory and examination of the improvements, are unanimously agreed, that, to the best of our knowledge and ability, we consider them to be worth the sum of twelve thousand six hundred and thirty-five dollars and seventy-four and half cents.

"Nor must I be unmindful of the obligations I am under to several gentlemen in this country, distinguished for their taste and talents in this department of science. The Hon. ''Robert R. Livingston'', our former Minister in France; Professor Mitchill, of this city; John Stevens, Esq. of Hoboken; Mr. Bernard M'Mahon, of Philadelphia; Mr. Stephen Elliot, of Beaufort, South-Carolina; Dr. Darlington, and Mr. John Vaughan, of Pennsylvania; John Le Conte, Esq. of Georgia; Mr. William Prince, of Long-Island; and Mr. Andrew Gentle, seedsman, of this city; are also among the contributors to this institution."

"ANDREW GENTLE, Seedsman. 103 Maiden-Lane. Catalogue of the seeds at the store gratis.... Enquire of Mr. Hall or at the Bar."

"...early York Cabbage...sugar loaf...Russian...Battersea...Scotch Drumhead...early and late Cauliflower. With a general assortment of kitchen, garden, flower seeds. Catalogues can be had at the store gratis, No. 124 Fly-Market. ANDREW GENTLE."

"The Committee acknowledge with great pleasure, the reception of a large collection of seeds from Monsieur [André] Thouin, the Professor of Agriculture and Botany at the Jardin des Plantes, of Paris, and another from our learned countryman, Mr. Jefferson, as lately received by him from his European correspondents. Those seeds have all been conveyed to the Botanic Garden, where, in the hands of the present curator, Mr. Andrew Gentle, they will doubtless be cultivated with great care and fidelity."

"BOTANIC GARDEN SEEDS AND PLANTS. For sale, by the subscriber, SEEDS, the growth of this year. Those wanting seeds to send to Europe will do well to apply, as they can be supplied with scarce and new species, on the most suitable terms. Also, a handsome collection of ornamental trees, plants in pots, and flowers, can be had daily during the ensuing winter. Apply to ANDREW GENTLE, at the Botanic Garden."

"SEEDS. THE GROWTH OF 1820. ANDREW GENTLE, from the Botanic Garden, informs his former customers and the public, that he has recommenced the seed business at the store, 155 Water-st., near the Fly Market, where Gardeners and Agriculturalists may depend on getting seeds genuine.
"...A fine assortment of Bulbous Roots, Tulips, Hyacinths, &c. Double Camellias and other ornamental Plants. All kinds of implements for the garden, on the shortest notice, on the most reasonable terms."

"Mr ANDREW GENTLE (at the Botanic Garden) has for sale there, and at his Store, No. 155 Water-st. New-York, a general assortment of Garden and Agricultural seeds, the growth of the present year. Fruit trees (true of their kinds.) Ornamental shrubs, plants, &c. Fine hyacinths, fit for glasses; Tulips, and other bulbous roots, for the open ground; the present time is the best for planting them. Seeds put up for foreign orders with the greatest care.... Green-house plants received for the winter, at very moderate charge, and will have the same attention as his own. Flower-pots and garden tools."

Categories:
This page was last edited on September 13, 2021, at 17:28.
Content is available under Creative Commons Attribution-NonCommercial-ShareAlike unless otherwise noted.
Terms of Use
Privacy Policy
A Project of the Center for Advanced Study in the Visual Arts
National Gallery of Art, Washington