Alley is used in the American setting to describe various forms of walks bordered by plantings on either side, and often appears alongside avenue and walk in treatises and descriptions (see Avenue and Walk).[1] General dictionaries, such as those by Thomas Sheridan and Noah Webster, even define walks and alleys to be synonymous. Despite their similar meanings, however, the term “walk” was more broadly defined in specialist literature; walks occur in a variety of settings outside the garden (for example, rope walks). Alley, despite its frequent use denoting a narrow passage in a town, has a more particular association with the designed landscape than either avenue or walk, having been derived from the French verb aller (to go), which was often associated in British and American gardening treatises with French formal gardens.

The repeated use of the phrase “walks and alleys” in American garden writing suggests that there was a distinction between the two terms, although that nuance of meaning is neither clear nor consistent. In the late seventeenth century, French treatise author Jean de La Quintinie often used the terms “alley” and “walk” interchangeably, and distinguished alleys as more narrow than avenues. Other treatise writers find the main criteria of an alley to be a walkway formed between two rows of plantings, defined by either low borders, such as in Lewis Beebe’s description of flowers lining the alleys at Lemon Hill in Philadelphia, or by tall, mature shade trees forming an enclosing canopy. This latter definition was exemplified at New Haven Burying Ground (as described by Timothy Dwight in 1796), André Parmentier’s horticultural and botanical garden, with its alleys of nectarine, peach, pear, apple, plum, and cherry trees [64], and Thomas Jefferson’s plantation, Monticello [72]. In contrast to the treatises, usage examples suggest that alley referred to walkways of all sizes planted on either side, from the pedestrian paths of Gray’s Garden in Philadelphia and Jefferson’s six-foot-wide “allies” between grass plots at Monticello to the alley wide enough for two carriages to pass at the New Haven Burying Ground. The “Tenpin Alley” in the pleasure grounds of the Pennsylvania Hospital for the Insane is an example of the use of the term to describe a site for bowling that looks completely different from the more common garden element, the bowling green (see Bowling green) [1097]. 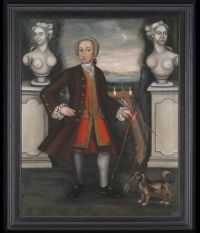 George Booth as a Young Man

This page was last edited on August 13, 2021, at 15:28.
Content is available under Creative Commons Attribution-NonCommercial-ShareAlike unless otherwise noted.
Terms of Use
Privacy Policy
A Project of the Center for Advanced Study in the Visual Arts
National Gallery of Art, Washington