Difference between revisions of "Alley"

Alley is used in the American setting to describe various forms of walks bordered by plantings on either side, and often appears alongside avenue and walk in treatises and descriptions (see Avenue and Walk).[1] 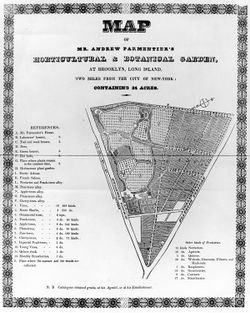 General dictionaries, such as those by Thomas Sheridan and Noah Webster, even define walks and alleys to be synonymous. Despite their similar meanings, however, the term “walk” was more broadly defined in specialist literature; walks occur in a variety of settings outside the garden (for example, rope walks). Alley, despite its frequent use denoting a narrow passage in a town, has a more particular association with the designed landscape than either avenue or walk, having been derived from the French verb aller (to go), which was often associated in British and American gardening treatises with French formal gardens. The repeated use of the phrase “walks and alleys” in American garden writing suggests that there was a distinction between the two terms, although that nuance of meaning is neither clear nor consistent. In the late seventeenth century, French treatise author Jean de La Quintinie often used the terms “alley” and “walk” interchangeably, and distinguished alleys as more narrow than avenues. Other treatise writers find the main criteria of an alley to be a walkway formed between two rows of plantings, defined by either low borders, such as in Lewis Beebe’s description of flowers lining the alleys at Lemon Hill in Philadelphia, or by tall, mature shade trees forming an enclosing canopy. This latter definition was exemplified at New Haven Burying Ground (as described by Timothy Dwight in 1796), André Parmentier’s horticultural and botanical garden, with its alleys of nectarine, peach, pear, apple, plum, and cherry trees, and Thomas Jefferson’s plantation, Monticello. 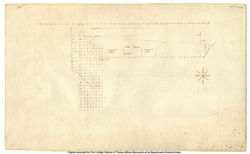 Thomas Jefferson, Plan of of Orchard, 1778

In contrast to the treatises, usage examples suggest that alley referred to walkways of all sizes planted on either side, from the pedestrian paths of Gray’s Garden in Philadelphia and Jefferson’s six-foot-wide “allies” between grass plots at Monticello to the alley wide enough for two carriages to pass at the New Haven Burying Ground. The “Tenpin Alley” in the pleasure grounds of the Pennsylvania Hospital for the Insane is an example of the use of the term to describe a site for bowling that looks completely different from the more common garden element, the bowling green (see Bowling green) 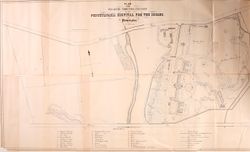 Thomas S. Sinclair, Plan of the Pleasure Grounds and Farm of the Pennsylvania Hospital for the Insane at Philadelphia

“a garden, genteelly laid out in walks and alleys, with flower-knots, &c. laid round with bricks.”

“The numerous walks are well graveled and rolled hard; they are all in a serpentine direction, which heightens the beauty, and affords constant variety. That painful sameness, commonly to be met with in garden-alleys, and others works of this kind, is happily avoided here, for there are no two parts of the Mall that are alike. Hogarth’s ‘Line of Beauty’ is here completely verified.”

“We then rambled over the Gardens, which are large—seemed to be in a number of detached areas, all different in size and form. The alleys were none of them straight, nor were there any two alike. At every end, side, and corner, there were summer-houses, arbors covered with vines or flowers, or shady bowers encircled with trees and flowering shrubs, each of which was formed in a different taste.”

“Behind the State-house is a public garden; it is the only one that exists in Philadelphia. It is not large; but it is agreeable, and one may breathe in it. It is composed of a number of verdant squares, intersected by alleys.”

“The field was then divided into parallelograms, handsomely railed, and separated by alleys of sufficient breadth to permit carriages to pass each other. The whole field . . . was distributed into family burying places. . . . Each family burying-ground is thirty-two feet in length, and eighteen in breadth: and against each an opening is made to admit a funeral procession. At the divisions between the lots trees are set out in the alleys: and the name of each proprietor is marked on the railing.”

“Mr. Pratts garden for beauty and elegance exceeds all that I ever saw—The main alley, 13 feet wide, and 20 rods long is upon each side graced with flowers of every kind and colours—and 18 wide. An alley of 13 feet wide runs the length of the garden thro’ the centre—Two others of 10 feet wide equally distant run parallel with the main alley. These are intersected at right angles by 4 other alleys of 8 feet wide—Another alley of 5 feet wide goes around the whole garden, leaving a border around it of 3 feet wide . . . next to the pales. . . . The border of the main alley is ornamented with flowers of every description.”

“The allies are 6. f. wide that thro’ the lucerne makes that plot so much more than two acres.”

“laid out in the old fashioned style of uniformity, with walks and allies nodding to their brothers, and decorated with a number of evergreens, carefully clipped into pyramidal and conical forms.”

“It is perfectly compact—closely built, and as far as it extends, has the appearance of a great city. It has numerous streets, lanes, and alleys, and in all of them, there is the same closeness of building, and the same city-like appearance.”

“At the extremity of these extensive alleys and pleasure-grounds, ornamented with fruit-trees and shrubbery, and clothed in perennial verdure, stands two hot-houses, and as many green-houses, situated in the sunniest part of the garden, and shielded from the northern winds by a long range of wooden buildings for the accommodation of servants.”

“A main walk extends around the garden, with alleys leading from one side to the other.”

“It was laid out in square parterres and beds, regularly intersected by graveled and grass walks and alleys.”

“for the fairer and larger your allies and walkes be, the more grace your Garden shall have, the lesse harme the herbes and flowers shall receive, by passing by them that grow next unto the allies sides, and the better shall your Weeders cleanseboth the beds and allies.”

“Allies, are such as we call Walks in any Garden. See Walks, and their Use and Proportion, see in the Body of the Book.
“Allies, are said to be Bien Tirrées, Bien Repassées, or Bien Retirrées, that is, well plain’d, when they are laid smooth and firm and tight again, with the beater or rouling Stone after they have been scraped or turned up with an Instrument to destroy the Weeds.
“Diagonal Allies. See Diagonal. [Diagonal Allies, or Lines, are Allies or Lines drawn cross one another through the Center of each, and cross any square in a Garden from corner to corner, thereby to give them the fuller view of the square.]
“Parallel Allies. See Parallel. [Parallel Allies, are Allies of an equal breadth through their whole length, and running along in lines equally distant all along from the lines that compose the sides of the Allies which answer them] . . .
“Avenues, are certain Allies or Walks in Gardens larger than ordinary, but more properly leading to the front of Houses.”

Category:
This page was last edited on May 29, 2012, at 20:48.
Content is available under Creative Commons Attribution-NonCommercial-ShareAlike unless otherwise noted.
Terms of Use
Privacy Policy
A Project of the Center for Advanced Study in the Visual Arts
National Gallery of Art, Washington